The Exotic Materials at the Chang’e-5 Landing Site

The Chang’e-5 (CE-5) mission is China’s first lunar sample return mission. CE-5 landed at Northern Oceanus Procellarum (43.06°N, 51.92°W) on December 1, 2020, collected 1731 g of lunar samples, and returned to the Earth on December 17, 2020. The CE-5 landing site is ~170 km ENE of Mons Rümker, on one of the youngest mare basalts (Em4/P58) of the Moon [1,2], which are never sampled by the Apollo or Luna missions. The CE-5 returned samples are currently being analyzed by the Chinese scientists, and the first batch of data have been released by the Lunar Sample Information Database (https://moon.bao.ac.cn/moonSampleMode/index.html). This study describes the provenance of lunar regolith at the CE-5 landing site in order to provide context for the ongoing sample analysis.

To determine post-Em4/P58 craters, we conducted a comprehensive literature study of these nine craters to collect their AMAs or relative ages (Table1 in [5]). Aristarchus (280 Ma), Copernicus (779-796 Ma), Harding (881 Ma), and Kepler (625-950 Ma) are Copernican-aged and dramatically younger than ∼1.53Ga, and their ejecta inevitably overlies the Em4/P58. Lichtenberg (>1.68G) and Pythagoras (2.68 Ga) are older than 1.53 Ga, therefore, they are unlikely to be ejecta source craters. To the east of Em4/P58, albedo and compositional data show abundant ejecta with a NE-SW direction; thus, we inferred that the NE-SW orientated ejecta should dominate the ejecta composition because of their extensive areal distribution. Ejecta tracing back to the parent craters indicate an origin either from Harpalus or Sharp B or both. More detailed morphological and compositional investigations of Harpalus and Sharp B craters show that Harpalus has a much younger appearance, with distinct high albedo radial ray/ejecta and boulders. Sharp B crater has a more subdued morphology, without clear radial ejecta and boulders. Based on their morphology and degradation state, Harpalus is likely to be Copernican-aged and Sharp B should be Eratosthenian-aged or even older, while crater counting directly on their rims are NOT reliable [5], which may be contaminated by secondary craters, self-secondary craters, partially buried craters, and the extra slopes.

After we examined the main source craters of ejecta in the mapped region, we conducted a thorough investigation of ejecta in Em4/P58 using their long axis directions (Fig. 1); the ejecta was traced back to one of the nine listed craters. According to the mapping, the eastern part of Em4/P58 is covered by extensive ejecta from Harpalus crater, which can be traced continuously back to its source. Three large Copernican craters to the southeast of Em4/P58 (Aristarchus, Copernicus, and Kepler) also provide a significant amount of ejecta, especially Copernicus crater.

To quantitatively analyze the contribution from different distant ejecta sources, we calculated their thicknesses in the study region using the power-law model modified by [6]. According to this calculation, Harpalus contributes the most ejecta to Em4/P58 (∼10 cm), followed by two Copernican-aged craters Copernicus (∼8 cm) and Aristarchus (∼3 cm). Contributions from Kepler and Rümker E are negligible. The ejecta thickness calculation agrees well with the ejecta distribution tracing, suggesting Harpalus is the main ejecta source, dominating the overall ejecta thickness for Em4/P58. Sharp B crater is OLDER than Em4/P58 based on its morphological characteristics, thus its ejecta does NOT overlie Em4/P58.

The percentage of contributions from each ejecta source crater was calculated to first-order by employing [7]’s regolith gardening model. Considering the CE-5 mare basalts have an age of between 1.6-1.7 Ga, the top ∼74 cm regolith is mixed up. Because the total ejecta thickness from studied source craters is ∼22 cm, we can assume all ejecta layers are mixed into the first ∼74 cm of lunar regolith. This yields the overall exotic components at the CE-5 landing site of ∼9%. Harpalus (∼6%), Copernicus (∼2%), and Aristarchus (∼1%) are the three most important source craters, agreeing with the map results (Fig. 1). 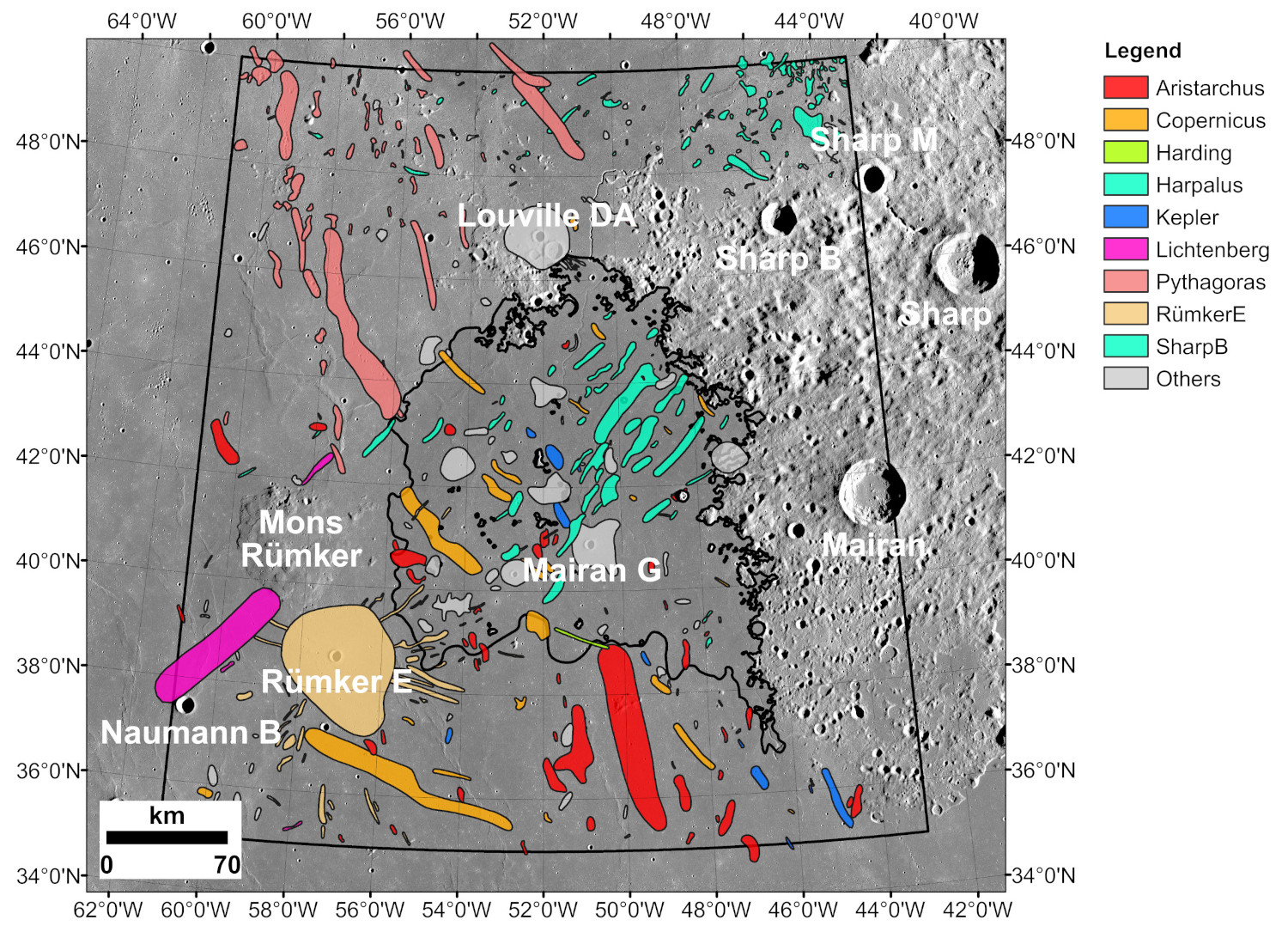 In addition to exotic materials delivered by the distal impacts (e.g., Harpalus, Copernicus, and Aristarchus), three other types of exotic materials have high scientific significance. The first one is exotic components from subjacent and adjacent highlands by lateral mixing [8], the second type of exotic components may originate from silica-rich domes, and the third one from the meteorites. However, the overall composition of the lunar regolith are from the local (~91%) mare basalts erupted by Rima Sharp (Qian et al., 2021b) with foreign materials from mainly Harpalus, Copernicus, and Aristarchus craters (Qian et al., 2021c). All of the local and exotic materials can be used to answer at least some of the scientific questions listed by Qian et al. (2021c) to deepen our understanding of the Moon.