The altitudes of Martian water-ice clouds above Gale crater are being calculated through the Cloud Altitude Observation (CAO) taken by the Mars Science Laboratory (MSL, Curiosity). Typically, a mission needs a lidar onboard to calculate altitude, but this observation utilizes local topography – Aeolis Mons – to follow shadows and determine an absolute wind velocity. Comparing this velocity to the angular wind velocity found in a paired vertical movie determines the cloud’s altitude. This method is useful for the community when a mission doesn’t have a lidar but nearby terrain to observe shadows. During Mars Year (MY) 35, 28 observations were collected and will be compared to Campbell et al. [1] results from MY 34 to determine any changes.

The Aphelion Cloud Belt (ACB) season is a yearly equatorial cloud belt caused by cooler atmospheric temperatures. Occurring between solar longitude (Ls) 45°-150°, water-ice clouds are typically visible during two times of each sol, early morning and late afternoon [2,11]. Since 2012, MSL has been observing the ACB season in Gale crater (4.5°S, 137.4°E) with a variety of cloud observations to study seasonal and diurnal changes of different parameters such as seasonal and diurnal changes [1,8,9], cloud altitude [1], opacity [8,9,10] and ice crystal geometry [3].

One parameter, altitude, is of interest to the atmospheric science community to determine the cloud’s relation to the Planetary Boundary Layer (PBL). Orbiters are able to constrain cloud altitudes through limb measurements but observations within 10 km of the surface are hampered by dust opacity [7]. This is difficult for studying the PBL in Gale crater from orbit as the PBL is very shallow during the ACB season, ranging between 2-3 km [5,12]. From the surface, cloud altitudes could be measured with a lidar [4, 13], but only a single Mars mission has carried this instrument and therefore we must employ other methods to find altitude.

As described in Campbell et al. [1], a new atmospheric observation was implemented on MSL during the MY 34 ACB season. Typically used for dust-devil searching, the Navigation Camera (Navcam) took a movie pointed at Aeolis Mons observed shadows moving along the mountain cast by clouds above. These shadows were georeferenced with a digital terrain model and the distance travelled was used to determine an absolute wind velocity. Angular wind velocity is already determined using a vertically pointed movie that follows how clouds move with respect to the camera’s field of view [1]. When these two movies are paired together, the comparison between velocities is used to calculate altitude via trigonometry. Therefore, this paired movie combination facilitates a way to directly calculate cloud altitudes at Gale crater for the first time. For the remainder of MY 34 season, these observations were paired whenever possible and resulted in 9 detections of clouds and their shadows, with the results reported in [1].

Following this success, a new MSL observation was designed, optimized, and implemented to observe water-ice cloud shadows and deduce the water-ice cloud altitudes for the MY 35 ACB season and named the Cloud Altitude Observation (CAO).

The CAO is performed in the ACB season on a weekly cadence. It consists of two movies – Cloud Shadow Movie (CSM) and Zenith Movie (ZM) – taken one after the other by the Navcam. Both are made up of eight 1022x1022 pixeled images and span 240 seconds each. The CSM (Figure 1, top) points directly at Aeolis Mons to capture shadow motion which is used to determine an absolute wind velocity. The ZM (Figure 1, bottom) points directly above the rover and is used to determine an angular velocity based on the camera’s field of view. Comparing these two velocities allows the altitude of the clouds to be calculated. 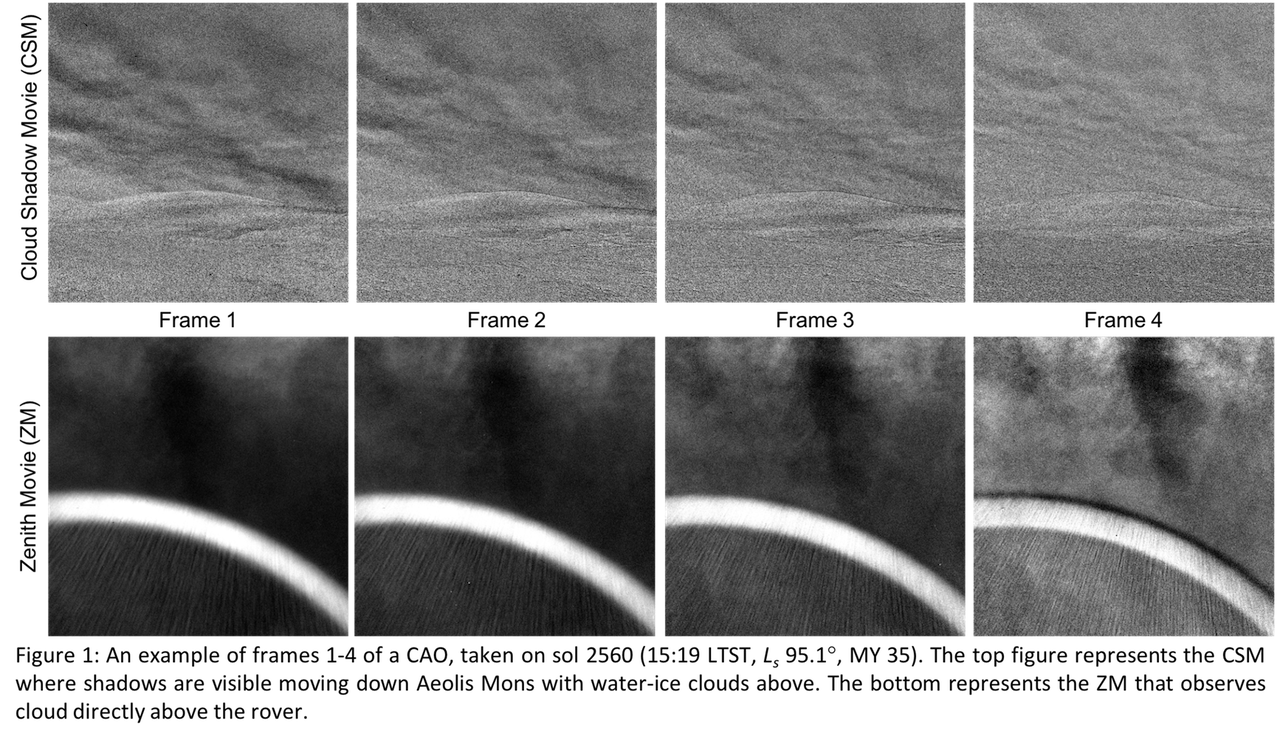 A total of 28 observations were collected between Ls 47°-163° and will be compared to MY 34 results [1] to determine any seasonal changes. Processing and analysis of these observations are ongoing, but the entire MY 35 ACB season's data will be processed and analyzed by the time of the conference.

The MY 35 ACB season is unique in that it followed a Global Dust Storm (GDS) that occurred from Ls 188°-250° [6]. These storms are large enough to envelope the entire planet and affect the local and global environment. MSL has the unique ability to continue operations during a GDS and detected dust optical depths of up to an order of magnitude larger than normally observed [6]. Studying how the cloud altitudes change before/after the GDS will help determine if there are any long-term effects to the water-ice clouds. Once the MY 36 ACB season concludes, it will be added to the current data set to further determine any seasonal changes.