Aerosols and clouds in planetary atmospheres

Atmospheric aerosols and cloud particles are found in every atmosphere of the solar system, as well as, in exoplanets. Depending on their size, shape, chemical composition, latent heat, and distribution, their effect on the radiation budget varies drastically and is difficult to predict. When organic, aerosols also carry a strong prebiotic interest reinforced by the presence of heavy atoms such as nitrogen, oxygen or sulfur.

The aim of the session is to gather presentations on these complex objects for both terrestrial and giant planet atmospheres, including the special cases of Titan’s and Pluto's hazy atmospheres. All research aspects from their production and evolution processes, their observation/detection, to their fate and atmospheric impact are welcomed, including laboratory investigations and modeling. 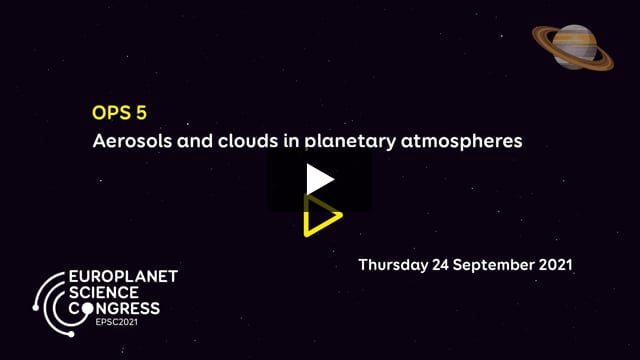 Clouds and hazes play a major role in (exo)planetary atmospheres. They can absorb and reflect light from UV to thermal infrared wavelengths, changing the atmospheric emission, reflection, and transmission spectra dramatically. The organic aerosols forming the haze can act as cloud condensation nuclei. Then can also settle down onto the surface, hence participating in its composition. Dedicated laboratory experiments have been developed to produce solid materials that are analogs of haze and cloud particles, under different experimental conditions (molecular precursors, temperature, pressure, energy source…). These experimental studies are key to investigating the physical and chemical processes that drive the formation of solid particles from gas and solid phase molecular precursors in planetary environments. These experiments also allow the characterization of the physical, optical and chemical properties of the laboratory-generated haze and cloud particle analogs, hence providing critical information that can be used as input parameters in models for the analysis and interpretation of observational data (e.g. optical constants, vapor pressures, spectral features, grain morphology, etc).

Here, as examples of these laboratory efforts, we will present various studies that combine (1) experiments performed to produce analogs of Titan and Pluto atmospheric aerosols from gas phase molecular precursors, (2) experiments conducted to simulate the formation of benzene ice cloud particles in Titan’s stratosphere, and (3) experiments carried out to characterize the haze and cloud particle analogs to provide, in particular, optical constants and vapor pressures. We will show how important these studies are for the interpretation of observational data from past, current and future (exo)planetary missions. We will also introduce the newly funded NASA Center for Optical Constants whose overarching goal is to support a stable, long-term, synergistic laboratory effort to address a critical need throughout the broader planetary science community for the development of a comprehensive database containing complex refractive indices (optical constants) of laboratory-generated analogs of organic refractory materials, and ices present in planetary atmospheres and surfaces.

Titan, Saturn's largest moon, has a thick nitrogen-based atmosphere, where during its flyby, the IRIS infrared spectrometer aboard the Voyager 1 spacecraft detected nitriles, such as HCN, formed by EUV photochemistry based on methane CH4 and molecular nitrogen N2. Titan is also surrounded by an organic photochemical haze, according to the observations of the Cassini-Huygens and Voyager 1 missions.

In-situ measurements by the Huygens spacecraft [1], and laboratory experiments synthesizing Titan analog aerosols (called tholins), have revealed that HCN is one of the major chemical signatures extracted from the aerosols, and their laboratory analogues.

Laboratory experiments were conducted using a powder plasma reactor mimicking Titan's ionosphere, replicating the formation of Titan-like organic aerosols, and the associated chemistry. In this work, we simultaneously study the temporal evolution of HCN present in the gas phase, and the formation and growth of Titan tholins.

Analogues of Titan aerosols are formed using the experiment PAMPRE [4]. PAMPRE is a reaction chamber, where a cold radiofrequency plasma capacitively coupled is ignited at low pressure (~0.9 mbar). A gas mixture of 95% N2 and 5% CH4 is introduced into the reactor. Subsequently, a 12W discharge is generated between two electrodes, which ionizes the N2 and CH4 present.

In this plasma, the radicals and products formed by ionization of methane and nitrogen, will combine by several reaction pathways, to form more complex organic particles and nitriles such as HCN, in the same way as in the ionosphere of Titan.

The images show primary nanometer monomers coagulated and formed aggregates (Figure 1). These aggregates continue to evolve to form single spherical particles of ~1.5 µm in diameter (Figure 1). These experimental results are in agreement with the evolution predicted by the model [2] on aerosols residing in the atmosphere of Titan.

Absorbance measurement is performed using an FTIR, on pellets composed of ~ 99.6% KBr and ~ 0.4% tholins. Three absorption bands stand out on the mid-infrared absorption spectrum. In particular, the intense bands at 1560 cm-1 and 1630 cm-1 (Figure 2) which correspond to different functional groups, such as aromatic or aliphatic -NH2, C=N, C=C, aromatic or heteroaromatic groups, difficult to distinguish from each other. The presence of these nitrogenous aromatic compounds can be promoted by HCN [3] [5].

The growth of the particles could be observed by the SEM analysis. Moreover, the IR analysis shows the presence of nitrogenous chemical bonds, corresponding to aromatic compounds or nitrile. This growth may be due to the incorporation of HCN chemistry on the surface of the tholins. Indeed, MS analysis of the gas phase shows a progressive consumption of HCN during the formation and growth of  Titan tholins. Our experimental results are consistent with numerical models based on Cassini-Huygens observations: A formation of atmospheric HCN on Titan, and its efficient incorporation in Titan’s haze to produce large organic polymers.

Aerosols are ubiquitous in planetary atmospheres in solar and extrasolar systems. Since aerosols greatly impact atmospheric thermal structures and observations, it is vital to understand how they form in a variety of environments. Here, we investigate photochemical haze formation on Triton---the largest moon of Neptune---using a detailed microphysical model. We found that simulated haze profiles without condensation of C2H4 ices hardly explain both UV and visible observations of Voyager 2 simultaneously, while icy haze models can reasonably explain the observations. Thus, condensation of hydrocarbon ice likely plays vital roles in the haze formation on Triton. Our study highlights the importance of condensation physics in haze formation, which has often been neglected in modeling studies, especially for exoplanetary hazes.

Aerosols are universally present in atmospheres on solar system planets. Recent observations also suggest that photochemical hazes are ubiquitous even in the extrasolar planets (e.g., Sing et al. 2016, Crossfield & Kreidberg 2017). Because the hazes significantly impact on atmospheric energy balance (e.g., Zhang et al. 2017) as well as the observability of atmospheres (e.g., Lavvas & Koskinen 2017, Kawashima & Ikoma 2018, Gao & Zhang 2020, Ohno & Kawashima 2020), it is crucial to figure out how they form in a variety of environments. To this end, solar system objects provide a great opportunity to study the haze formation process thanks to abundantly available observations. Titan, Pluto, and Triton are typical solar system objects that possess hazy atmospheres. For Titan and Pluto, haze formation processes have been studied by microphysical models (e.g., Lavvas et al. 2010, 2020, Gao et al. 2017). For Triton, however, the haze formation process has not been investigated in detail since the discovery of near-surface haze layer during the Voyager 2 flyby 1989.

We have developed a new microphysical model to study the haze formation on Triton (Ohno et al. 2021). Our model simulates the evolution of both size and porosity distributions of haze particles in a self-consistent manner without assuming a specific fractal dimension (Figure 1). We compare the simulated haze profiles with those constrained by Voyager’s observations of solar occultation in UV and scattered lights in visible (Herbert & Sandel 1991, Rages & Pollack 1992). We investigate several possible nature of Triton’s haze, namely spherical and non-spherical particles with and without condensation of C2H4 ice.

Ice-free hazes, usually assumed for Titan, Pluto, and exoplanet hazes, cannot simultaneously explain both visible and UV observations of Triton’s hazes. This is because spherical hazes hardly grow into sufficiently large sizes, and aggregate hazes have low single scattering albedo with optical constants of Titan’s haze analog. We suggest that condensation of C2H4 ice onto haze particles can remedy the model-observation discrepancy by altering haze material properties, such as density and optical constants. Both ice sphere and ice aggregate models reasonably explain the existing observations of Voyager 2 (Figure 2) when the haze mass flux is comparable to the column-integrated photolysis rate of CH4. Future Triton missions with wider wavelength coverage and phase angles would be able to disentangle these two scenarios. Our results suggest the potential importance of haze-cloud interaction, which has been often neglected in modeling studies. We will also discuss the implication of haze microphysics studied here to interpret observations of exoplanetary atmospheres.