ESA and NASA will launch two missions to explore the main Galilean moons of Jupiter in the coming years, JUpiter ICy moons Explorer-JUICE and Europa Clipper, respectively. Both missions will be able to determine the distribution of the potential habitable zone in the upper dozens of kilometers of the ice bodies by using onboard radar instruments [Bruzzone et al. 2013, Grasset et al., 2013, Phillips and Pappalardo 2014, Aglyamov et al. 2017]. Considering the possible presence of mixtures of water with salts, volatiles, and clays in the ice and liquid layers, we performed laboratory experiments to obtain the electrical properties of these chemical systems at solid and liquid state, and at different pressure conditions (Table 1). The results that we present at the conference will facilitate the interpretation of the future data received from the radar sensors.

We measured the dielectric properties of these samples with a BDS80 Broadband Dielectric Spectroscopy system (Novocontrol), which allows working in a frequency range from 1 Hz to 10 MHz and temperatures from 143 to 323 K. Both, real permittivity (ε´) and electric conductivity (σ) were measured at 0.1 MPa while cooling the samples in temperature steps of 10 K. From these data, we calculated the activation energy and the attenuation of the radar wave depending on the chemical composition, the temperature of the sample, and the frequency of the applied electric field [Petrenko and Whitworth 1999, Pettinelli et al. 2015].

Conductivity measurements at high pressure were carried out using a modification of a chamber used previously for planetary simulation experiments (Muñoz-Iglesias et al. 2019). It is based on a stainless steel cylinder, which has different access on the bases and along the main body. Pressurization of the sample is carried out by water or gas from one access at the chamber base, while a sapphire window is at the opposite side for visual control and spectral analysis. Connections throughout the body of the cylinder are for the thermocouple, the pressure gauge and a special one to plug in the electrical sensor. The key feature is the plug for in-situ conductivity measurements with feed through wires connected to the probe, made of two Pt electrodes placed in a PTFE structure in order to maintain the configuration and to ensure the distance between electrodes (around 500 micrometers). Both electrodes have connections to isolated copper wires, which pass through the cell body to be connected to the signal transducer and the computer to record the data. 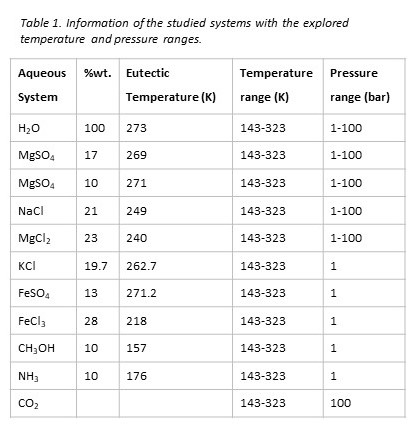 This work was supported by the ESA contract number 4000126441/19/ES/CM. We thank Anezina Solomonidou for assistance in the project proposal.