Icy worlds: Past and future explorations

The exploration of the outer solar system by Galileo at Jupiter, Cassini-Huygens at Saturn, New Horizons at Pluto-Charon and Dawn at Ceres, has revealed that several icy worlds harbor subsurface salty liquid reservoirs underneath their cold surface. By flying through the icy-vapor plume erupting from Enceladus' south pole, Cassini proceeded for the first time to the analysis of fresh materials coming from an extraterrestrial ocean, revealing its astrobiological potentials. Even if there is no direct evidence yet, similar oceanic habitats might also be present within Europa, Ganymede, Titan and Triton, which will be characterized by future missions currently under development (JUICE, Europa Clipper, Dragonfly), or under study (Europa Lander, Trident, Enceladus orbiter/lander mission). Understanding these icy ocean worlds and their connections with smaller icy moons and rings requires input from a variety of scientific disciplines: planetary geology and geophysics, atmospheric physics, life sciences, space weathering, as well as supporting laboratory studies, numerical simulations, preparatory studies for future missions and technology developments in instrumentation and engineering. We welcome abstracts that span this full breadth of disciplines required for the characterization and future exploration of icy world systems. 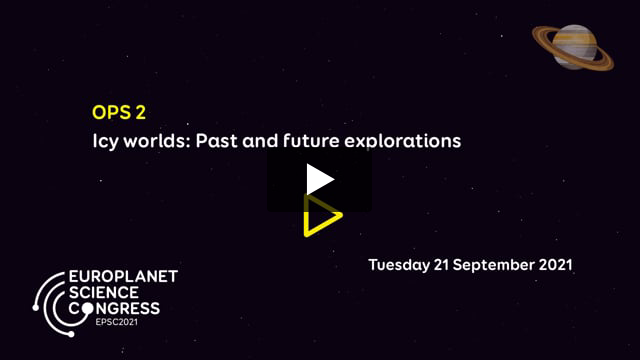 The Juno Extended Mission (EM) presents the first opportunity to acquire gravity measurements of the Galilean satellites after the Galileo mission, ended almost 20 years ago. On June 7th, 2021, Juno will flyby Ganymede with a closest approach altitude of ~1050km and a relative velocity of ~18.5 km/sec. This will be the first time that a probe acquires gravity measurements of Ganymede since December 28th, 2000, when Galileo performed G29, its last flyby of this Galilean moon.

In total, the Galileo probe performed 6 flybys of Ganymede, among which only 4 had coherent two-way S-band Doppler tracking during the closest approach, and could be used to estimate the gravity field of Ganymede. The very first analysis of these data, used only two flybys, G1 and G2, and estimated J2 and C22 applying the hydrostatic equilibrium constraint (J2/C22 = 10/3) (Anderson et al., 1996). The analysis concluded that Ganymede’s internal structure is likely formed by a metallic core surrounded by a silicate mantle enclosed by an ice shell. A subsequent gravity field analysis was unable to fit all tracking data (G1, G2, G7 and G29) without including a high degree gravity field nor obtain a physical interpretation of the results (Schubert et al., 2004). These problems could be solved only by adding mass anomalies to the dynamical model of Ganymede’s interior (Anderson et al., 2004; Palguta et al., 2006).

This new encounter, (G34), during Juno’s EM, offers the possibility of improving the knowledge on the gravity field of Ganymede. The gravity field of a body can be estimated through the reconstruction of the probe’s trajectory during a close encounter, exploiting the dynamical Doppler shift of a highly stable microwave carrier, induced by the relative motion between the DSN stations on the Earth and the probe. During G34, through which Juno will also perform a radio occultation experiment, the spacecraft will use simultaneously the X/X and X/Ka radio links. An accurate range-rate noise budget led us to the conclusion that we can expect an accuracy of 0.025 mm/s, at 60 s integration time, compatible to the accuracy acquired during PJ13 and PJ27, where the same radio link configuration was adopted. By comparison, the Galileo range-rate data had an accuracy of 0.34 mm/s, because of the use of S-band link and the onboard Low Gain Antenna. Moreover, this link configuration allows to use the multi-frequency link calibration technique to remove the downlink plasma contribution, preventing biases from local dispersive noises as the possible Ganymede’s ionosphere or the Io plasma torus.

Nevertheless, our results from a covariance analysis indicate that, by itself, G34 cannot provide an improvement to the current knowledge on Ganymede’s interior structure, being only able to constraint the hydrostatic ratio J2/C22 to the ~45%. This is mainly due to the flyby characteristics, and in particular the high relative velocity. However, a joint analysis with the coherent S-band radio tracking data of the Galileo spacecraft (Figure 1), acquired more than 2 decades ago, represents an opportunity to shed some light on the gravity field of this Galilean satellite.

Figure 1: Juno and Galileo ground-tracks over Ganymede during the different encounters. The ticks are separated by 60 s.

This work will present an updated gravity field of Ganymede, showing the possible implications in terms of interior modelling. This will be the outcome of a joint analysis of all the available real data acquired during G34 and the Galileo flybys, applying modern orbit determination techniques used in the past in the Cassini gravity analyses (Durante et al., 2019, Zannoni et al., 2020). The real data used in this analysis will be the last gravity measurements of Ganymede acquirable until future flybys, of Juice and Europa Clipper missions, in the next decade.

LGC, MZ and PT are grateful to the Italian Space Agency (ASI) for financial support through Agreement No. 2017-40-H.0, and its extension 2017-40-H.1-2020, for ESA’s BepiColombo and NASA’s Juno radio science experiments. The work of RP, DB, MP, and SL was carried out at the Jet Propulsion Lab, California Institute of Technology, under a contract with the National Aeronautics and Space Administration. Government sponsorship acknowledged.

Introduction: Chaotic terrains on the icy moon Europa are among the youngest surface features within the satellite’s visible geological history [1]. These regions appear as highly disrupted surfaces formed by irregular groups of isolated plates surrounded by a lumpy matrix material [2]. They are often covered in a reddish-brown material that is interpreted to consist of hydrated sulfates [3] or sulfuric acid hydrate [4]. Current models of chaos formation include a melt-through of the surface provoked by an internal heat source (i.e. a hydrothermal plume) [5], or the mobilization of brines trapped near the surface, in response to partial melting of the outer shell induced by icy diapirs rising through the crust [6]. We investigated two chaotic terrains named Thrace Macula and Thera Macula, both located on the southern hemisphere of Europa. Among the hypotheses proposed to explain their origin are the upwarping of the surface followed by an extrusion of low-viscosity liquids [7, 8], the collapse of large-scale domes [9], or interactions between the ice and shallow subsurface water lenses [10]. Here we provide a geomorphological and stratigraphic analysis of Thrace and Thera Macula, derived from an extensive geological mapping based on the highest-resolution images of the area acquired throughout the Galileo space mission. We also provide preliminary results of a topographic analysis performed on photoclinometric DEMs obtained using Ames Stereo Pipeline [11, 12].