The binary asteroid 65803 Didymos-Dimorphos is the target of NASA’s DART (Cheng et al., 2018) and ESA's Hera missions (Michel et al., 2018). Hera will arrive at the asteroid system several years after the DART impact. It will carry out a detailed characterisation of the asteroids’ overall properties and will measure the outcome of the DART impact on Dimorphos.

Didymos, the primary body, is a fast spinning asteroid with a period of only 2.26 hours, which is very close to the critical spin limit of 2.2 hours for asteroids bigger than approx. 200 m (Walsh et al., 2018). The interior structure of Didymos is crucial for our understanding of its stability. Without cohesion and with an estimated bulk density of 2.1 g/cc, Didymos is not able to keep its shape stable (Holsapple, 2001; Zhang et al., 2017) and thus, cohesive forces might be present in its structure.

The interior strength properties of asteroids determine to a large degree their collisional evolution. For small bodies, even a small level of cohesion can significantly affect the outcome of an impact  (Raducan and Jutzi, 2021).

Previous studies have applied N-body and soft-sphere discrete element (SSDEM) codes to study the structural stability of rubble pile asteroids (Sanchez and Scheeres, 2012; Zhang et al., 2017, 2021; Ferrari and Tanga, 2020). Recently, the stability and failure modes of such objects have been studied using finite element (FEM) (Hirabayashi et al., 2020). Here we use Bern’s Smooth Particle Hydrodynamics (SPH) code (Jutzi et al., 2008; Jutzi 2015) to simulate the rotating asteroid and to investigate its physical properties. To do this, we set up Didymos according to its recent shape model (provided by the Hera Didymos Reference Model) with a bulk density of 2.1 g/cc and we spin up the body to a rotation period of 2.26 hours.

For the preliminary simulations presented here, we assume that Didymos has a homogeneous structure. We perform simulations using a range of values for the cohesion and the internal friction coefficient of the asteroid, and then for each case we evaluate Didymos’ stability.

An example of such a simulation is shown in Figure 1. For a cohesion of 100 Pa and a friction coefficient of 0.4, we find that Didymos’ shape is stable and only very little deformation takes place, as indicated by the small values in the total accumulated strain. In Figure 2, we show the case with a lower cohesion of 0.1 Pa and a coefficient of friction of 0.4. In this case, Didymos experiences large-scale deformations. To quantify the degree of deformation, we compute the cumulative strain distributions for both cases (Figure 3). For the 100 Pa cohesion case, > 90 % of the total mass experiences a total strain of < 0.03 and therefore this case is considered to be stable. On the other hand, for the case with 0.1 Pa cohesion, > 50 % of the total mass experiences a total strain of > 0.5, consistent with the large scale deformations observed in Figure 2.

Our initial results suggest that a cohesion of ~ 10-100 Pa is required to maintain structural stability, which is consistent with recent SSDEM modeling results (Zhang et al. 2021).

However, so far only homogeneous structures have been explored. We plan to investigate also more complex interior structures that may lead to different outcomes in terms of required cohesion to obtain an overall structural stability. 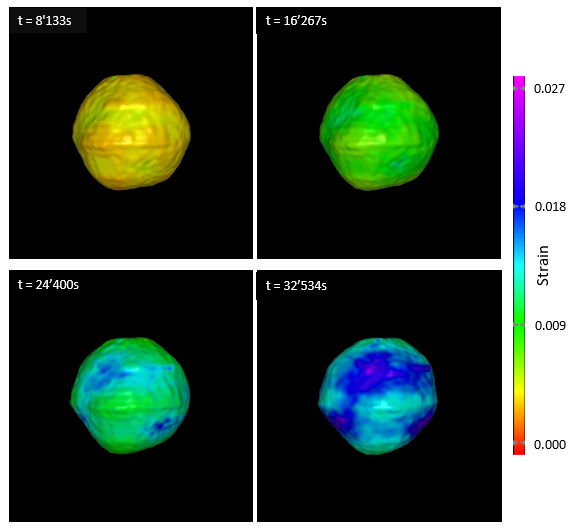 Figure 1: Surface of Didymos after spin-up is complete, for a friction coefficient of 0.4 and a cohesion of 100 Pa. The body is shown from the same side at four different times. The body experiences only very little deformation, as indicated by the small amount of accumulated strain. 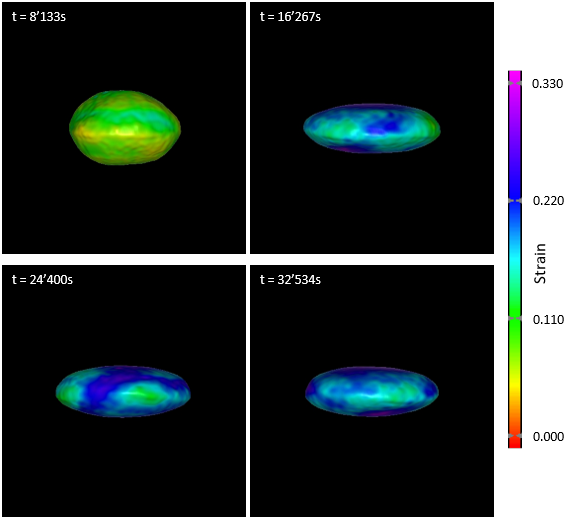 Figure 2: same as Figure 1, but this time for a friction coefficient of 0.4 and a cohesion of 0.1 Pa. The body gets deformed already before the spin-up is completed.

This work has received funding from the European Union’s Horizon 2020 research and in- novation programme under grant agreement No. 870377