Introduction:  The Space Science Data Center (SSDC) developed MATISSE (Multi- purposed Advanced Tool for the Instruments for the Solar System Exploration, [1]) webtool, whose v2.0 update [2] is available at https://tools.ssdc.asi.it/Matisse/, which allows access to data of the planetary exploration missions.

The MATISSE tool uses some protocols provided by the Virtual European Solar & Planetary Access (VESPA), including EPN-TAP, and allows access to a series of services without necessarily having to download the data, but view the maps directly online.

In this context the work here presented points at improving and expanding the functionalities of the MATISSE tool to the planetary geology, by including some already published geological maps. These will be essential in order to make MATISSE a useful tool for the analysis of planetary surfaces.

MATISSE for planetary geology: The geological maps involved in this project will be of fundamental help to the scientific community in the geological characterization of landing sites and to obtain useful information for the study of planetary bodies surface.

The good choice of the landing site, which satisfies both engineering and scientific requirements, represents one of the key points for the success of a space mission.

For example, the identification of landing sites, of particular geological / mineralogical interest, will be carried out thanks to data fusion techniques between visible images and infrared spectroscopic measurements. The tool in question will give the user the opportunity to observe the area in question integrating data of multiple sources.

MATISSE will also be able to carry out geomorphological analysis and morphometric products (e.g. slopes, relief, roughness index) which will allow a complete investigation both from the geological and engineering point of view.

In collaboration with PlanMap and GMap teams we are currently working to include Martian, Hermean and Cerean surfaces so that both recently ended missions (e.g., NASA’s Dawn) and missions still not in their scientific phase (e.g., ESA’s BepiColombo) would benefit for this work.

Work methodology: The geological maps of interest will be downloaded in appropriate format, so that every polygon representing a geological unit can be separately inserted into the geospatial database of MATISSE and be easily retrieved by the user.

In particular, the user can choose one or more of the polygonal units as input for the geographical query after selecting the target and the instruments of interest. In this way the MATISSE capabilities can be fully exploited even trough geological oriented requests.

Here are some examples of areas that we have analyzed on the Martian surface, with the collaboration of the PLANMAP team. These sites, Firsoff Crater and Commelin Crater, are located in Arabia Terra region. After a careful geological analysis of the two craters, similar morphological characteristics were identified [3].

After starting the query, the user will see the area with the selected lithologies displayed (figure 1) and can carry out appropriate analyzes. 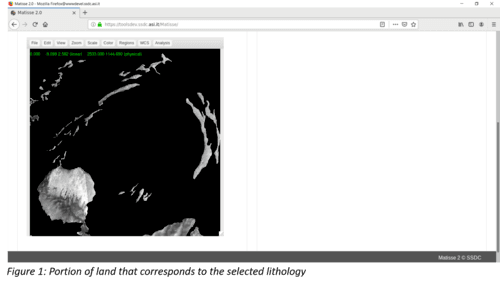 Expected outcomes: We plan to make available the first release of MATISSE with geological maps in the next months, even if starting with only limited capabilities.

The inclusion of these functionalities in the tool could produce a sensible step forward in the study of planetary geology, with the possibility of better exploiting different datasets and taking also into account the collaboration of different teams already leaders if this field.

Another goal will be to expand the use of the tool, making it similar to the Geographic Information System (GIS). We will expand the possibility of selecting specific areas to be analyzed on the base of the geographical position of the data and the pertinence to specific geological units. It will be also possible to obtain topographic profile and select multiple data to be simultaneously observed. All these analyzes will be performed directly on 3D models.