Thermophysical modeling with a particle size distribution: application to Ryugu and Bennu

The characterization of the surface material of airless bodies is important for the comprehension of the geology and evolution, and also for mission decisions as the selection of the sample site. The thermophysical properties affect the surface temperature curve, that is the temperature as function of time; the thermal inertia, defined by TI=(k ρ c)0.5 (where k is the thermal conductivity, ρ the density and c the specific heat), is the key parameter that controls the maximum daytime temperature and the time at wich the maximum occurs. A thermophysical model requires to properly model the thermal conductivity of the soil; common thermophysical models assume that surface material (regolith or rock) can be approximated as a continuous, non-discretized material whose physical properties are constant or vary with depth in some mathematical way, e.g. the density increases exponentially with depth. These assumptions are valid when the particles sizes are smaller than the thermal skin depth; however, high-resolution images of the Nightingale Crater on Bennu (DellaGiustina et al., 2019) revealed a particle size distribution in which the particles are smaller/larger than, and comparable to, the diurnal skin depth (that is of order of cm). Furthermore, the Bennu's moderate thermal inertia appears to be inconsistent with the large number of boulders, suggesting that the link between thermal inertia and particle size is not adeguately captured by standard models. We have included in our thermophysical model (Rognini et al., 2019; Capria et al., 2014) the effects of the particle size distribution, using the results of Ryan et al. (2020); numerical simulations by these authors indicate that the thermal conductivity of a polydisperse soil is approximated by the thermal conductivity of a monodisperse soil with a particle diameter equal to Sauter mean D32, that is the diameter of a particle with the same volume-to-area ratio. Corrections for non-isothermality of the particles are also included. These modifications allow us to properly model the temperature of rubble pile asteroids and analyze the thermal data from future missions; in particular, we want to apply our model to Ryugu and Bennu, the goals of JAXA and NASA missions Hayabusa 2 and Osiris-Rex, respectively, although the model can be used for the general case. We investigate how to use the simulation results of our thermophysical model as input for the non-spherical dust dynamics model (Ivanovski et al., 2017) that has been modified to study dust motion in near asteroid environments after recent and future impacts on rubble-pile asteroids performed by JAXA and NASA missions. Furthermore, we plan to constrain the dust distribution based on the data and simulations obtained by these missions. This will allow to foresee what kind of dust environment the ESA mission HERA could find at the encounter with the Didymos binary system. A version of the thermophysical code is almost ready to be available to the scientific community through MATISSE, the webtool developed at the SSDC in ASI (Zinzi et al., 2016); the modifications reported in this work will be included. 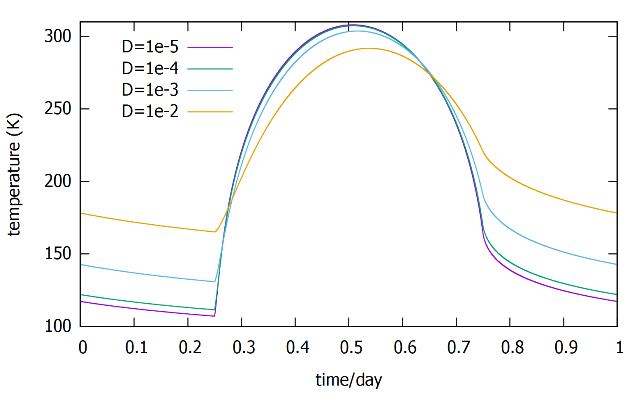