How reduced can post-impact terrestrial atmospheres be?

Giant impacts have been suggested as promising scenarios under which reduced species important to prebiotic chemistry can form (e.g., CH4, NH3, HCN, PH3). This scenario relies on the ability of the impactor iron core to chemically reduce the planet's H2O inventory, producing significant quantities of H2 gas. Previous studies have focussed solely on the internal atmospheric chemistry of this process [1, 2]. The influence of the impact-generated melt phase on the atmospheric composition has been neglected. Further, the impactor’s iron inventory has been assumed to be fully available to reduce the atmosphere. Here, we examine the effects of these two assumptions, and hence the ability of giant impacts to produce atmospheres suitable for subsequent prebiotic chemistry.

We evolve our systems, comprised of a target and impactor, from their pre-impact states to a post-impact state prior to interactions between the melt and atmosphere (Figure 1). Impactors have a mass ratio of iron core to silicate mantle of approximately 30:70. A range of impactor masses are considered, although a typical mass of 2x1022 kg can be defined based off of Earth’s mantle excesses in highly siderophilic elements [3]. The target has a pre-impact atmosphere of 100 bars CO2 and 2 bars N2, and a surface ocean of 1.85 Earth Oceans, considering estimates for early Earth. The target mantle oxygen fugacity is at the fayalite-magnetite-quartz buffer. As a result of the impact, the target’s initial atmosphere is eroded, its oceans are vaporised, and its surface is partially melted. The iron core of the impactor breaks up [4], and is either accreted by the target or escapes the system. Iron made available to the atmosphere during this accretion acts to reduce the vaporised oceans and form H2.

To calculate the silicate melt mass produced from impact, we use the iSALE shock physics code [5, and references therin]. Impact melt masses are determined and parametrised as a function of specific impact energy (Figure 2). To calculate the distribution of impactor iron, we use the GADGET2 smooth particle hydrodynamics code [6]. The distribution of the impactor iron (between the atmosphere, the mantle, and escaping the system) is determined and parametrised as a function of impactor mass, impact velocity, and impact angle (Figure 3, see also [7]).

We find that for larger impactor masses, both the inclusion of the impact-generated melt phase and the iron distribution individually act to decrease the abundance of H2 in the post-impact atmosphere. Together, their effects compound one another to produce a large decrease in H2 compared to the fiducial case without either effect. This change holds over a range of initial conditions.

We find that the greatest change is caused by the presence of the melt phase. Interactions between the atmosphere and melt phase alone (i.e., following previous models’ assumptions of all impactor iron being available to reduce the atmosphere [1]) can decrease the atmospheric H2 abundance by up to an order of magnitude, with greater change at greater impactor masses (Figure 4, left).

Including equilibration between the impact-processed atmosphere and the impact-generated melt phase, as well as distribution of the impactor’s iron inventory, can decrease atmospheric H2 by up to an order of magnitude compared to the fiducial model not considering these effects. Overestimated H2 abundances can produce atmospheres suitable for subsequent formation of reduced species important for prebiotic chemistry. However, these atmospheres are also problematic for prebiotic chemistry in terms of surface temperatures and the blocking of Solar UV radiation by reduced carbon species in the atmosphere.

Atmospheres that are in equilibrium with the impact-generated melt phases below them, and that have been formed under distribution of the impactor iron inventory, are more oxidised and less massive than the fiducial case without either effect. These atmospheres are thus less likely to encounter issues surrounding surface temperature and UV blocking. Importantly, despite the decreases in H2 from the fiducial case, these atmospheres still host H2 abundances sufficient for subsequent prebiotic chemistry to take place. 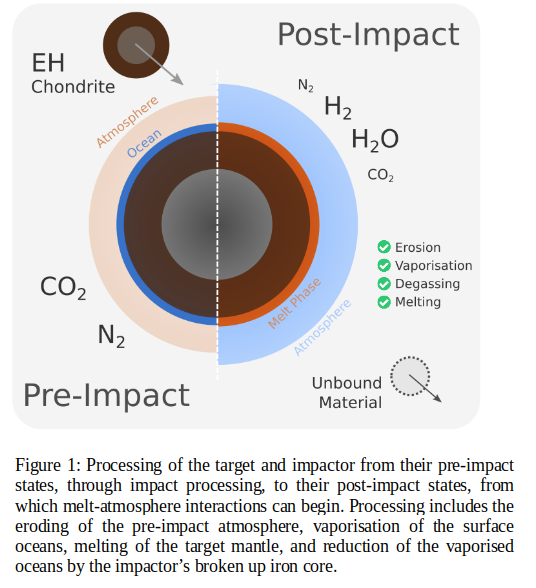 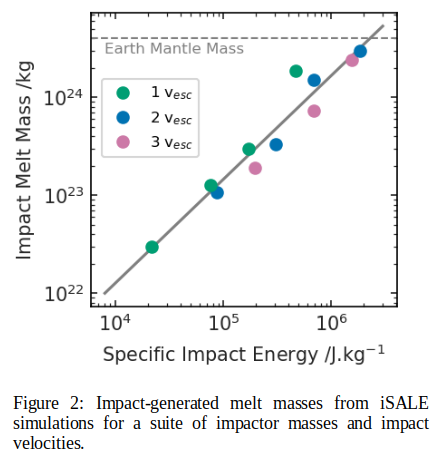 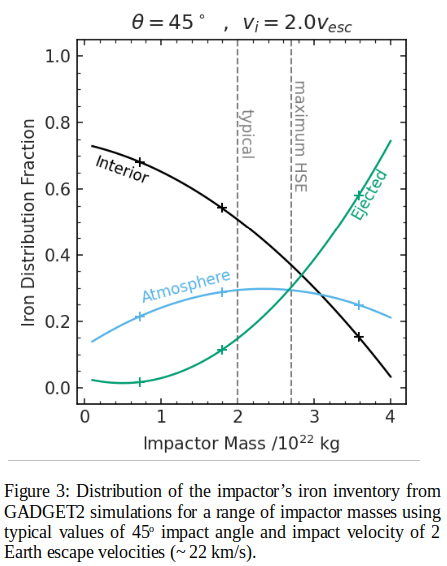 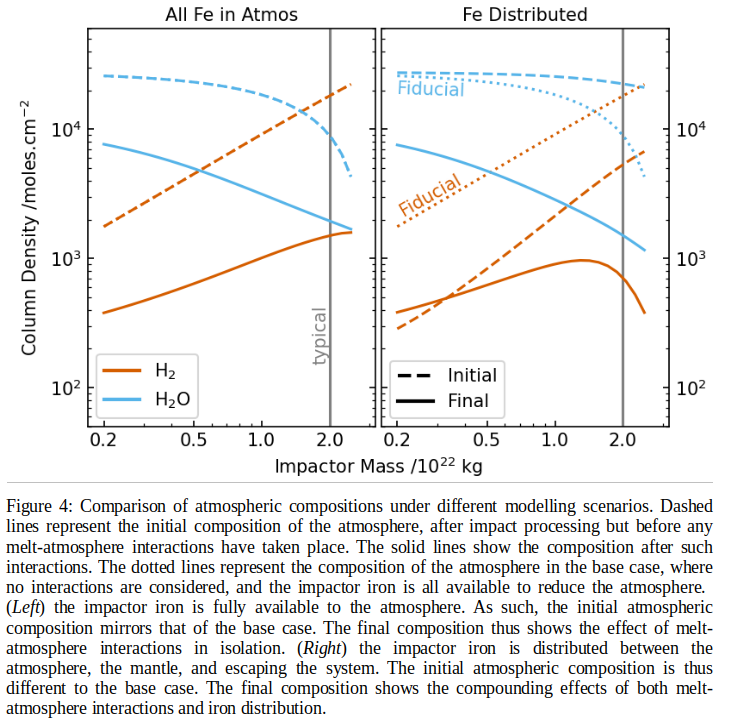