In light of the low oxygen fugacity inferred for Mercury, it is expected that Si is the dominant light constituent of Mercury’s core, potentially combined with smaller amounts of C and S. Depending on specific assumptions on Mercury’s oxidation state and bulk composition (for example, assuming a CB or EH chondrite-like bulk composition), geochemical estimates for the amount of Si, C, and S in Mercury’s core differ [1,2]. The concentration of light elements in Mercury’s core can be assessed independently from geochemical inferences using geophysical measurements. Geodetic constraints on the interior mass distribution of Mercury are derived from Mercury’s (close proximity to a) Cassini state 1 [3]. The compositional range of Mercury’s core for which the mass distribution of the planet is in agreement with geodetic measurements can be examined by planetary interior structure modelling [4-6]. Such interior structure modelling requires a composition-dependent parametrisation of the thermodynamic properties of metallic core alloys. Experimental measurements of density and  of ternary Fe-Si-C liquids at high pressures have been lacking, although they are crucial to constrain the compositional range of Mercury’s core, and of bulk Mercury, using geodetic information of the planet.

We experimentally measured the density and P-wave velocity (VP) of Fe-Si-C liquid metallic mixtures at high pressure, and investigated the feasible range of Mercury’s core composition in light of present geodetic constraints by interior structure modelling.

Ultrasonic VP measurements of Fe-Si liquid metals are performed at high-pressure and high-temperature with a PE press at beamline 16-BMB of the Advanced Photon Source (APS) synchrotron facility, in Argonne, Illinois. Ultrasonic signals of 20 MHz, 25 MHz, and 30 MHz are generated and received in-situ by a lithium niobite transducer located at the top of the setup. Vertical wave reflections at the top and at the bottom of the sample are recorded and used to determine the vertical two-way travel time of the ultrasonic wave through the sample. The sample length is determined from radiographic images that are collected in situ. The ultrasonic sound speed (VP) through the sample is calculated using the sample length and the two-way travel time of sound waves.

The samples that are successfully recovered from both the density experiments and the VP experiments are analysed by electron microprobe at the Institute for Mineralogy in Münster, Germany. A ternary ideal mixing model (FESIC) is fitted to the Fe-Si-C liquid metal density and  data obtained by us and to data available in literature. This mixing model is implemented in spherically symmetric interior structure models of Mercury that are constrained by the normalized moment of inertia of Mercury I=0.346±0.014 MR2 and that of its outer solid shell Im=0.1475±0.006 MR2 [3]. The thermal profile is taken linear in the upper part (assumingly conductive) of the core, and adiabatic lower in the core. An Fe-Si-C solid inner core is considered where temperature is below the melting temperature of the liquid alloy. The mantle and an assumed 40 km thick curst are parametrized as single density spherical shells with fixed density ratio. 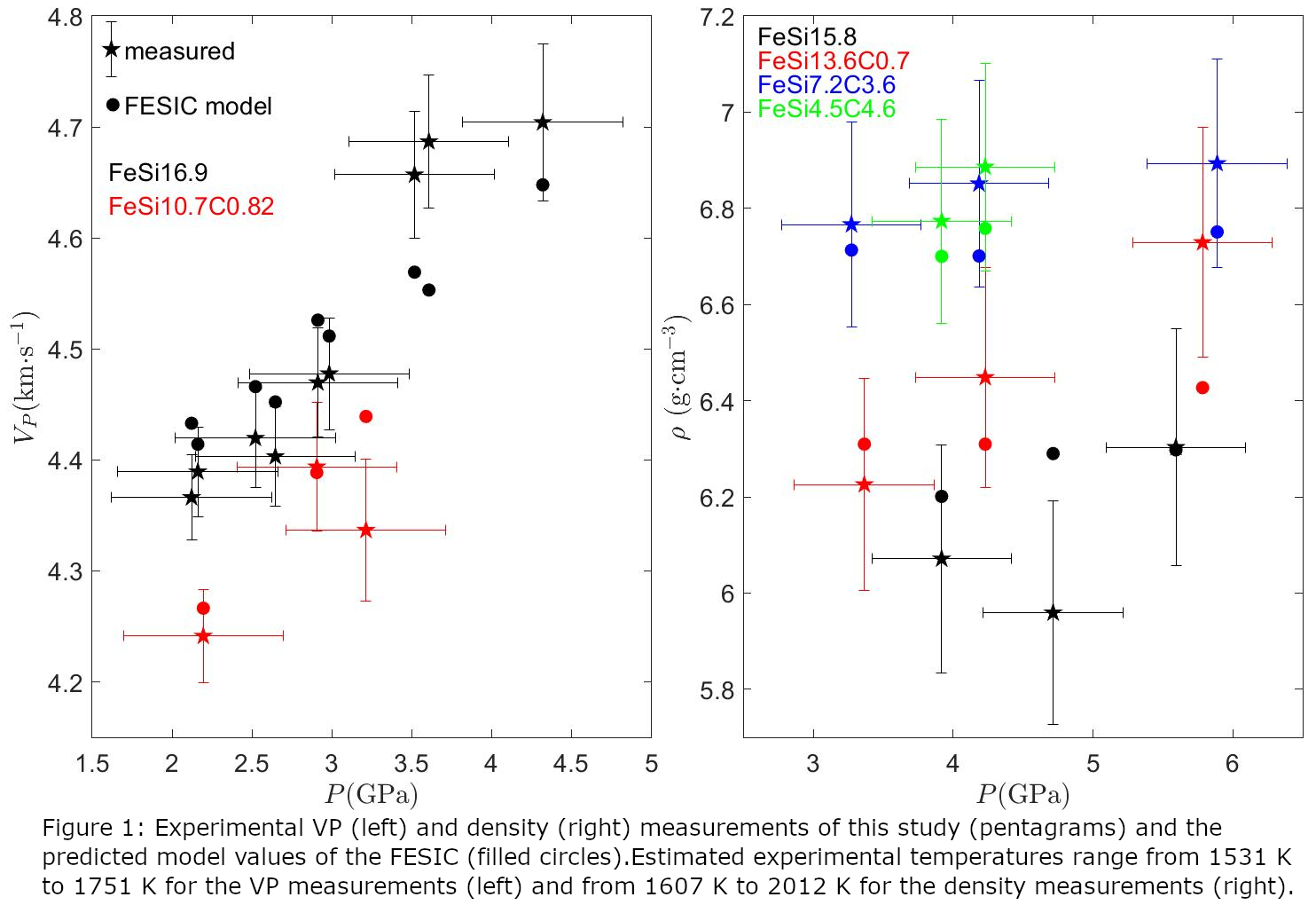 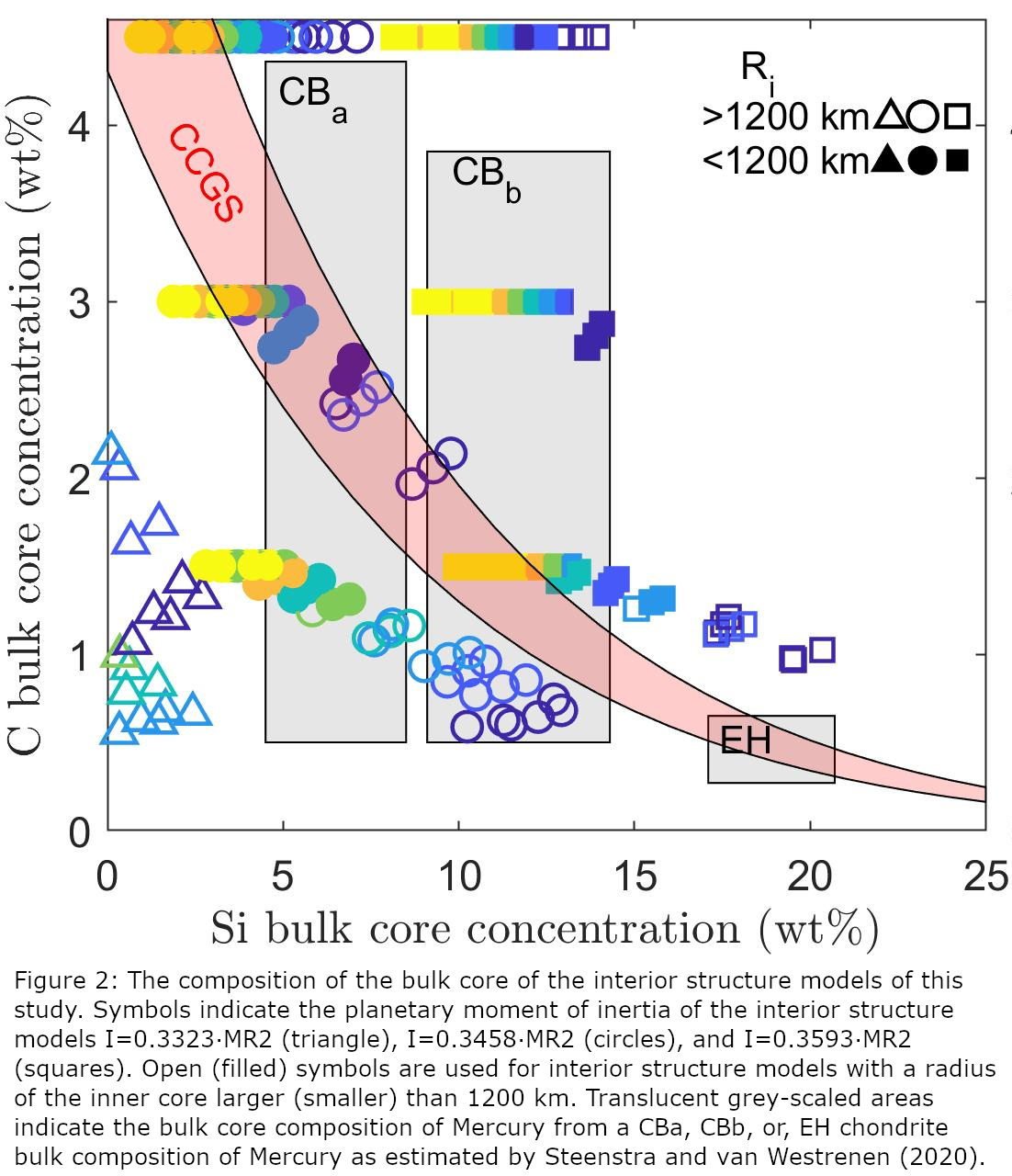 We acknowledge the Marie Sklodowska-Curie grant No 845354 awarded to JSK and the BRAIN-be program grant (BR/143/A2/COME-IN) to TVH. The X-ray absorption measurements were performed at the European Synchrotron Radiation Facility (ESRF), Grenoble, France. The APS is operated by Argonne National Laboratory under Contract No. DE-AC02-06CH11357.