The Dawn NASA mission investigated Ceres with its payload, including the Visual (0.25–1 μm) and InfraRed (1–5 μm) mapping spectrometer (VIR) [1].

The first findings from the VIR-IR channel confirmed some previous results from ground-based observations [2]: composition of surface includes a dark component (carbon and/or magnetite) and Mg-carbonates. The detection of a strong absorption at 2.7 μm was assigned to Mg-phyllosilicates; while the 3.06-μm absorption was attributed to NH4-phyllosilicates [3].

The elemental data from the GRaND instrument [4] provided additional constraints on the abundance of C, H, K, and Fe, [5,6], establishing that the dark material that makes up most of Ceres’ surface should be like carbonaceous chondrite [7,8].

Data were photometrically corrected to standard viewing geometry using Hapke modeling [13] according to [14]. Thermal emission was removed [11]. The resulting spectrum is shown in Fig. 1.

The VIR data have shown a clear absorption at 1 μm confirming previous ground observations [2]. The interpretation of such feature, in the context of the average spectrum of Ceres, provides new constraints on Ceres mineralogy. 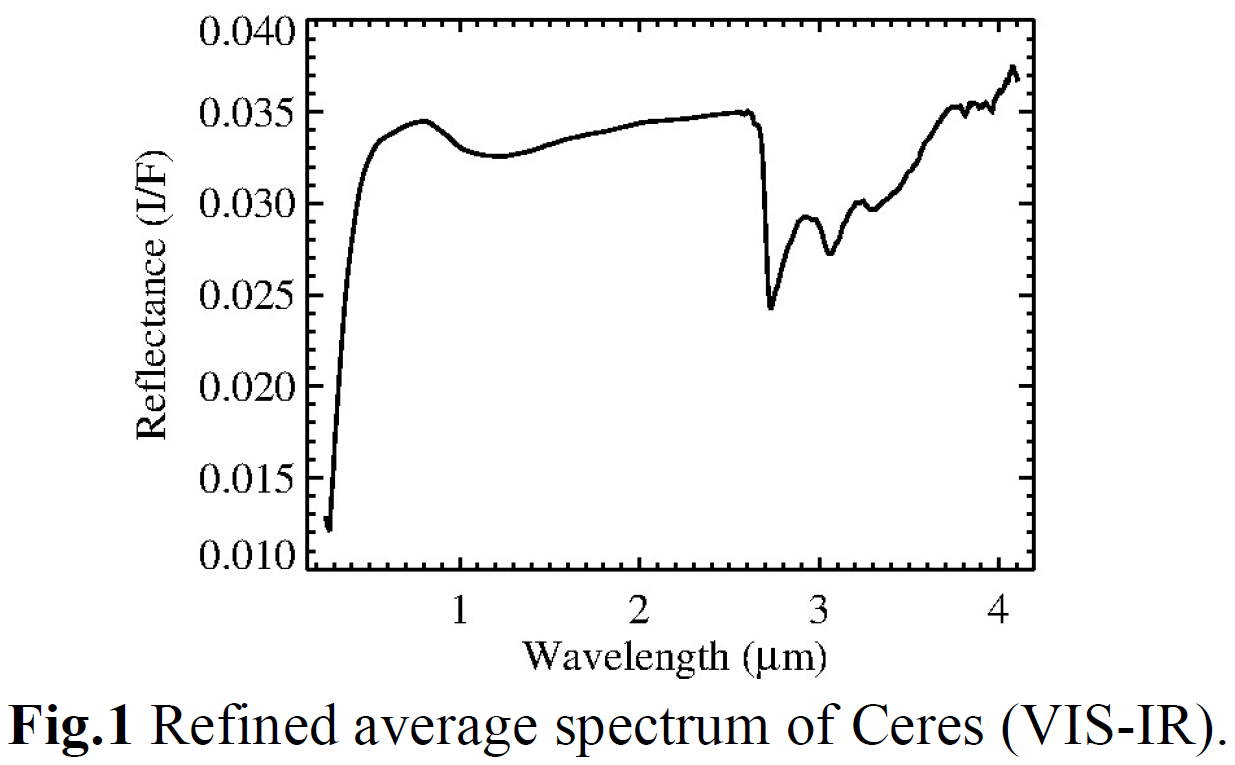 The 1-micron band that characterizes the average spectrum of ceres is also common in the spectra of several types of carbonaceous chondrites, (e.g., Ivuna CI, MAC87300 C2-ung, and DAV92300 CK4) (Fig. 2).

Previous work [15,16,17] has suggested that these meteorites are characterized by the presence of mafic silicates and magnetite, which are often the main constituents of their fine-grained matrix in addition to low-crystallinity components. In the VIS-NIR range, the main bands of mafic silicates are between 0.9 and 1.1 μm. These absorption features are induced by Fe2+, whose coordination in the crystal structure determines the position of the bands. Ferrous oxides, such as magnetite, show very shallow absorption in the VIS-NIR range. Iron-containing carbonates also have a broad band near 1 μm, but they also show several other vibrational bands between 1.7 and 2.6 μm, allowing them to be distinguished from silicates and oxides. The near-1 μm band associated with the presence of iron is also evident in the spectra of low-crystallinity Fe-containing materials, such as tektites and volcanic glasses. In this case, the depth of the 1μm band varies depending on the amount of iron in octahedral coordination [18]. 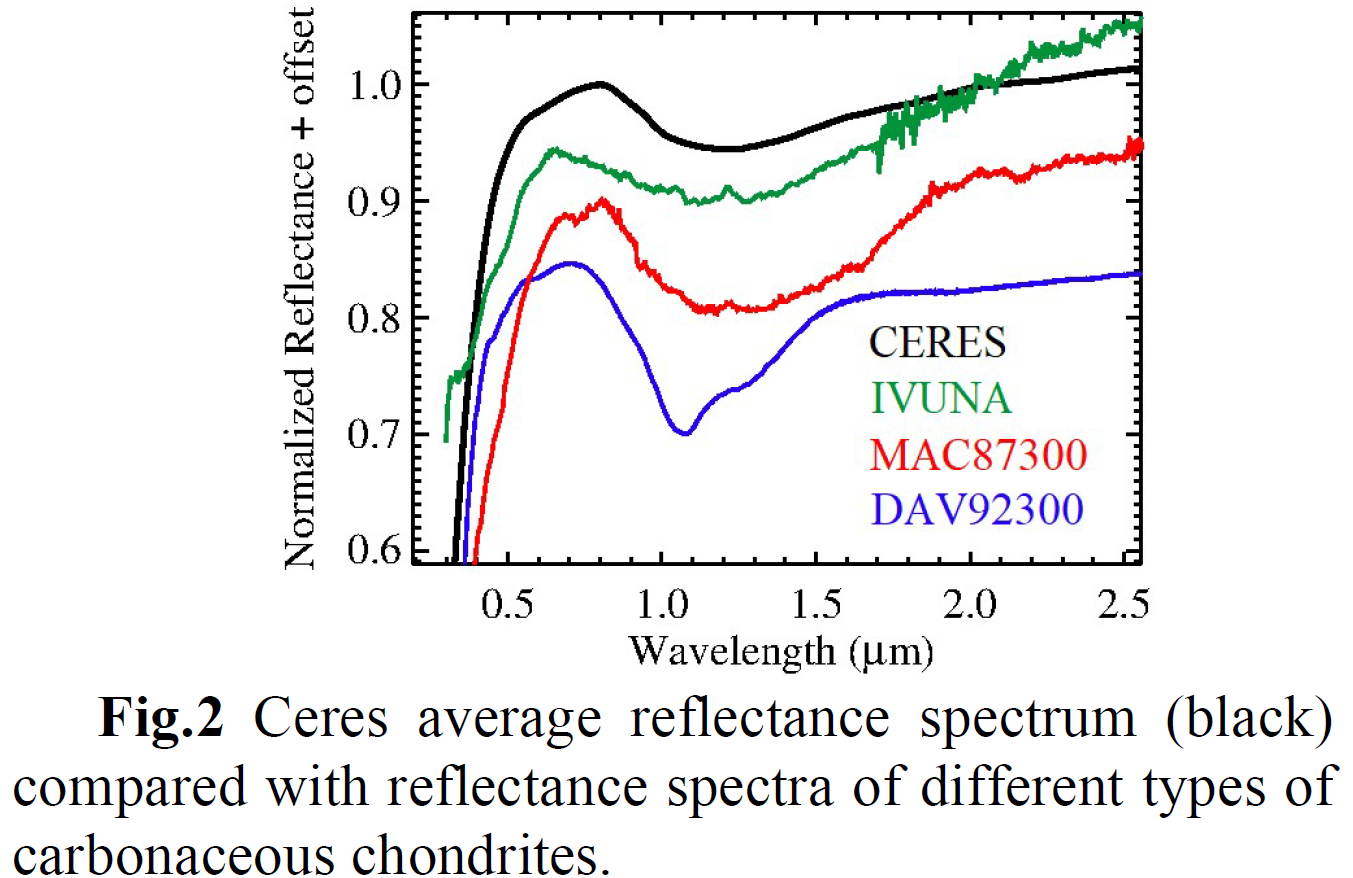 The possible presence of magnetite on the surface of Ceres as one of the agents responsible for the low albedo of the dwarf planet may be supported by the mineral assemblage as detected by the VIR. Thus, the simultaneous presence of Mg-serpentine could suggest that most of the magnetite could have formed during the serpentinization process because of a serpentinization reaction [21]. The contemporaneous presence of magnetite and serpentine could disguise the spectral contribution of olivine, which may be present as a partially serpentinized primary crust. The occurrence of olivine has also been identified in laboratory heated serpentine and in heated carbonaceous chondrites [22,23]. These laboratory data show that the incipient crystallization of metamorphic olivine changes spectral properties by introducing a bump near 0.8 μm and a broad band near 1 μm, which resembles that observed in the average Ceres spectrum. This does not prove that Ceres experienced a high-temperature metamorphic process because the metamorphic olivine nucleation involves high temperatures that are inconsistent with the stability of ammonium hosted in clay minerals [24,25]. In this case, the presence of olivine could be an indication of a partial serpentinization process that affected the surface of Ceres. During the serpentinization process, the dissolution of olivine is also related to the formation of poorly crystalline phases [26] that represent metastable precursors of crystalline serpentine. Amorphous and nanocrystalline material has also been found in the matrix of several carbonaceous chondrites [27]. Spectral data obtained on mixtures of crystalline olivine and ferrous glass indicate that by increasing the content of the amorphous component, the band at 1 μm becomes shallower [28]. An additional complication in the interpretation of the 1 μm band in the average Ceres spectrum can be introduced by the presence of a fine-grained coating of iron-containing material that can introduce a spectral slope [29] consistent with the VIR data.

Remnants of primary olivine, magnetite, and/or low-crystallinity iron phases may be responsible for the 1-μm band in Ceres' average spectrum. Further spectral modeling and laboratory activities will allow a better comprehension of this absorption feature giving important hints on the geological evolution of the dwarf planet.

at:https://sbn.psi.edu/pds/resource/dawn/dwncvirL1.html. The VIR is funded by ASI and was developed

under the leadership of INAF-IAPS. Selex-Galileo, Italy, built the instrument. The authors acknowledge the support of the Dawn Science, Instrument, and Operations Teams. This work was supported by ASIINAF n. I/004/12/0 and NASA.