Large and Low-albedo asteroids contain less altered materials that provide information related to the origin and evolution of the solar system and the conditions in which the solar nebula was active. Whether all these large asteroids share the same spectral properties with the dwarf planet Ceres can place crucial constraints on the thermal and dynamical theories of their formation and evolution of the early solar system. To that end, we measured new near-infrared spectra of large and low-albedo asteroids in the outer Main Belt region. Here we will present these new spectra and put the results in the context of dynamical and thermal models, providing more information about the origin and evolution of small bodies of the early solar system.

We obtained spectra of large asteroids with the long-wavelength cross dispersed (LXD: 1.9-4.2 µm) and PRISM (0.7-2.52 µm) modes of the SpeX spectrograph/imager at the NASA Infrared Telescope Facility (IRTF). The asteroids were observed between 2015 and 2020. The measured LXD spectra of low-albedo asteroids show a steep increase of apparent reflectance longward of ~2.5 μm, due to thermal radiation from the asteroids’ surfaces. Removing the thermal excess in spectra is important for proper characterization of mineral absorptions in asteroids. We used the Near-Earth Asteroid Thermal Model (NEATM) (Harris et al. 1998) to constrain the model thermal flux longward of 2.5 μm in asteroids.

The studied low-albedo and large asteroids consist of objects with diameters greater than ~120 km, a spectral class of C, B, P, F, and D, and an albedo of less than 9%. All spectra were found to be consistent with Ceres- and Europa-like groups (Figure 1), which were found to have a band centered around 3.05-3.15 µm, a broad 1-µm feature and concave-up NIR (0.85–2.45 µm) spectral shape at shorter wavelengths (Takir and Emery 2012). We also included previously published visible spectra (0.4-0.93-µm) in this study, to help provide a deeper understanding of surface composition of these asteroids.

Large and low-albedo asteroids studied previously (Takir and Emery 2012) and here show an interesting orbital distribution in that they are all located in the 2.8 < a < 3.4 AU region (Figure 4). Figure 1 also includes the low albedo asteroids, 24 Themis and 65 Cybele, which were observed by Rivkin and Emery (2010) and Campins et al. (2010), and Licandro et al. (2011), respectively.

All large low-albedo asteroids share spectral similarities with Europa- & Ceres-like groups in that they all have a broad 1-µm feature, which is attributed to aqueous alteration; however, these asteroids have an absorption feature centered ~3.15 µm- consistent with Europa-like group only. Hygiea is the only discovered asteroid that has a surface composition similar to that of the dwarf planet (1) Ceres (Takir and Emery 2012, Vernanzza et al. 2017). 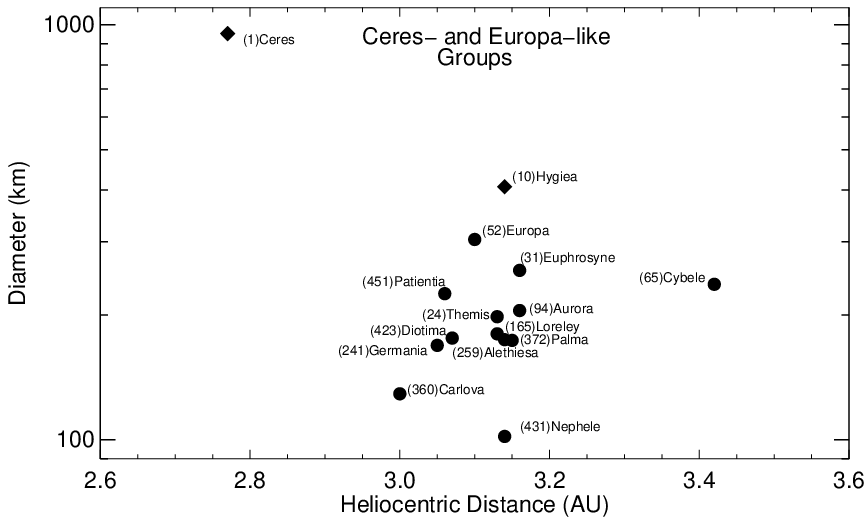 Figure 1. Orbital distribution of Ceres- and Europa-like groups, which are located in the ~2.8-3.4 AU region. The filled diamonds represent Ceres-like group, which include the dwarf planet Ceres and asteroid Hygiea. The rest of the low-albedo and large asteroids are spectrally similar to the Europa-like group (filled circles).