The characterisation of exoplanets is among the most active and rapidly advancing fields in modern astrophysics. An increasing number of observing techniques have enabled the characterisation of exoplanet system properties and provided access to the planetary atmospheres (chemical composition, thermal state and dynamics). Recently, combined analyses using different types of observations have outperformed the standard approaches, e.g. enabling precise constraints on the chemical abundances and elemental ratios in their atmospheres, or measurements of both the star and planet spin-orbit angles.

The goal of this session is to inspire the cooperation between specialised teams to overcome the limits of the fragmented data analyses and to break degeneracies in their interpretation. Contributions are invited to present new methods and/or analyses that combine different kind of observations for comprehensive exoplanet characterisation. 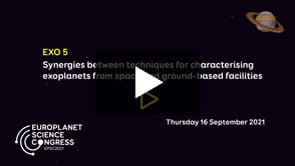 We try to reconcile contrasting results about the composition of exoplanet atmospheres investigated with high-resolution and low-resolution spectroscopy.

Ground-based spectrophotometric observations of transiting exoplanet atmospheres conventionally rely on correcting for instrumental and telluric systematics in the light curves by using reference stars that are simultaneously observed. However, this approach often leads to sub-optimal corrections due to multiple accounts on which the target and reference star spectra can be affected by systematics differently through the night, ultimately limiting the achievable precision and accuracy on the measurement of planetary atmospheric signatures. We introduce a new method based on Gaussian Processes regression to address this challenge by extracting the transmission or emission spectrum without relying explicitly on the reference stars. Our new method overcomes the necessity of using reference stars and opens up the doors to ground-based atmospheric observations of exoplanets orbiting bright host stars (e.g. those discovered by TESS) that intrinsically lack proper reference stars. We present results from the application of our method to a broad sample of exoplanets observed in the optical and near-infrared using Gemini/GMOS and Keck/MOSFIRE. We also discuss the challenges and possible solutions arising from stellar variability towards combining high precision ground-based low-resolution spectroscopy observations in complementarity with future infrared observations from HST and JWST.

***Results under embargo. Paper accepted for publication at Nature Astronomy, to be published in June.***

Multi-transiting planetary systems around bright stars offer unique windows to comparative exoplanetology. Nu2 Lupi (HD 136352) is a naked-eye (V=5.8) Sun-like star that was discovered to host three low-mass planets with orbital periods of 11.6, 27.6, and 107.6 days via radial velocity monitoring with the HARPS spectrograph. The two inner planets (b and c) were recently found to transit by the TESS mission, prompting us to follow up the system with ESA's brand-new CHaracterizing ExOPlanets Satellite (CHEOPS). This led to the exciting discovery that the outer planet d is also transiting. With its bright Sun-like star, long period, and mild irradiation (∼5.7 times the irradiation of Earth), Nu2 Lupi d unlocks a completely new region in the parameter space of exoplanets amenable to detailed characterization. By combining all available space and ground-based data, we measured its radius and mass to be 2.56±0.09 REarth and 8.82±0.94 MEarth, respectively, and refined the properties of all three planets: planet b likely has a rocky mostly dry composition, while planets c and d seem to have retained small hydrogen-helium envelopes and a possibly large water fraction. This diversity of planetary compositions makes the Nu2 Lupi system an excellent laboratory for testing formation and evolution models of low-mass planets.

Determining the architecture of multi-planetary systems is one of the cornerstones of understanding planet formation and evolution. Resonant systems are especially important as the fragility of their orbital configuration ensures that no significant scattering or collisional event has taken place since the earliest formation phase when the parent protoplanetary disc was still present. As unveiled by TESS, CHEOPS, ESPRESSO, NGTS and SPECULOOS, TOI-178 harbours at least six planets in the super-Earth to mini-Neptune regimes, all planets but the innermost one form a 2:4:6:9:12 chain of Laplace resonances, and the planetary densities show important variations from planet to planet. TOI-178 have hence several characteristics that were not previously observed in a single system, making it a key system for the study of processes of formation and evolution of planetary systems. We will review what we know of TOI-178, and what we expect from futur observations.

More than 95% of the known exoplanets were discovered by the transit- and radial velocity techniques. However, the observed distributions of planets by their masses and by their orbital periods are significantly distorted by numerous observational selections, different for these techniques and different surveys.

The exoplanets distribution by periods generally follows a power law with an exponent of -0.75 and indicates a predominant (averaged) structuring of the planetary systems.

ExTrA (Exoplanets in Transits and their Atmospheres - Bonfils et al. 2015) is a new instrument composed of an array of three 60-cm telescopes capable of infrared photometry and located in La Silla, Chile. This instrument relies on a new approach that involves combining optical photometry with spectroscopic information in order to mitigate the disruptive effect of Earth’s atmosphere, as well as effects introduced by instruments and detectors.  ExTrA is currently being used to confirm TESS planet detections around M-dwarfs, refine transit parameters, and search for additional exoplanets in the same systems. ExTrA obtains a better precision for the planetary radius and for the transit timings for late M-type stars with one or a few TESS transits. This work already led to the confirmation of a mini-Neptune around the M-dwarf TOI-269 (Cointepas et al. 2021). ExTrA will also work in tandem with NIRPS, a near-infrared spectrograph that will join HARPS (High Accuracy Radial velocity Planet Searcher) on the 3.6m ESO telescope to conduct a comprehensive radial-velocity survey on M dwarfs.

TESS is now routinely discovering new exoplanets and candidates (2647 TOIs in April 2021). Detailed analysis of the TESS lightcurves is necessary to select the best candidates for Radial Velocities (RV) follow-up as we cannot realistically observe all TOIs using ground facilities due to the instrument time required.
We developed a modular tool called "Follow-Up Lightcurves Multitool Assisting Radial velocities (FULMAR)" to select suitable follow-up targets more effectively, as the ones with lower stellar activity would require fewer observations to be confirmed. Our code compiles available TESS lightcurves for any selected target. It can filter the activity using different methods, compute the rotation period of the star using Gaussian Processes, search for transits in the detrended lightcurve using BLS or TLS and probe signals that were detected with RV. FULMAR could also reduce the necessary observation time per target, for example by killing aliases, allowing for the characterization of more systems with a given instrument.