Capillarity processes at Titan and beyond

The manifestations of capillarity are countless in daily life, going from liquids ascension in fibers to the dynamics of bubbles and droplets. On a scientific point of view, hydrodynamics of capillarity is a rather old field, but it is still the subject of very active researches (de Gennes et al. 2004; Drelich et al. 2020) with a wide variety of applications like micro-lenses or blood circulation. The two last decades of space exploration have revealed the existence of several extraterrestrial liquid phases: liquid methane-ethane-nitrogen mixtures in Titan’s polar regions (Stofan et al. 2007), liquid water on Enceladus (Porco et al. 2006) and probably on Europa (Sparks et al. 2017), while many evidences speak in favor of the massive presence of liquid water at the surface of Mars, billions years ago (Nazari-Sharabian et al. 2020). In addition, the presence of a global, subsurface water ocean, is suspected in other major icy bodies: Ceres, Callisto, Ganymede, Pluto, etc. Important planetary processes are driven by capillarity: the floatability of small objects, the formation and size distribution of raindrops or the aerosol formation by bubbles burst at ocean surface. From one planetary context to another, the nature of the working liquid and the gravity changing together, the effect of capillarity may be significantly altered. However the impact of this process on the observations of extraterrestrial liquid phases has been few addressed yet.

In this work, we address largely the impact of capillarity in the frame of planetary exploration, with a particular focus on what could be observed by Dragonfly, the future Titan’s in situ mission. We question the flotation of small solid particles at the surface of a liquid. We also investigate some properties of extraterrestrial rain droplets and their possible ground imprints. We discuss the interaction of floating films with bubbles bursting, and we close our purpose by considering raindrops absorption into a porous soil. All physical processes are questioned in the perspective of their potential geophysical implications.

An example of process: the floatability by capillarity

The presence of some floating material, over an interface between a liquid phase and a gaseous phase, can yield to major consequences by affecting exchanges of energy, momentum and matter between the phases. The form of this floating material may vary from a tiny monomolecular microlayer to a thick layer similar to sea ice. At the surface of terrestrial oceans, the presence of a thin floating film, produced by biological activity (Lin et al. 2003), has a damping effect on wave activity; marine films is an important topic, and constitutes a full-fledged academic discipline (Gade et al. 2006). Broadly speaking, a solid material is able to float at a liquid surface with the help a two physical processes: (1) the well known Archimede’s buyoancy force, for materials less dense than the liquid, (2) capillary forces. This is the second effect we study here. The floatability generated by capillarity has been studied for a long time since it is very relevant for flotation industrial processes (Chipfunhu et al. 2011; Mousumi & Venugopal 2016; Kyzas & Matis 2018). The sake of simplicity, classical studies of solid particles floatability consider idealized spherical particles (Scheludko et al. 1976; Crawford & Ralston 1988), we are following this approach here (see Fig. 1). 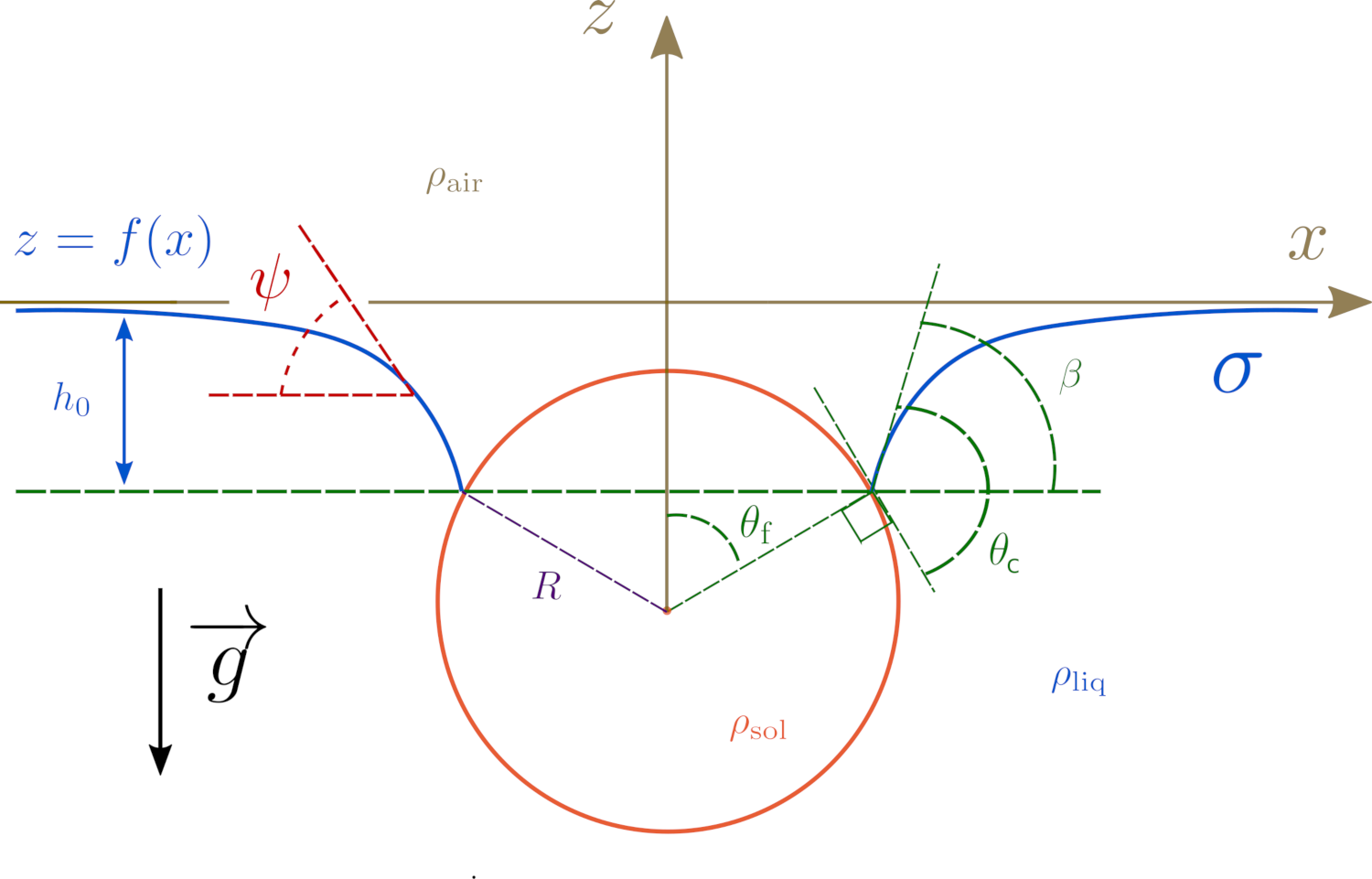 Fig. 1: Sketch of a spherical solid particle, of radius R and density ρsol, floating at the surface of a liquid with the density ρliq. The meniscus (blue line) is represented by the equation z = f (x), the surface tension of the interface is σ, while the contact angle between the solid and the liquid is denoted θc; θf is the filling angle. The difference of height between the plan of flotation and the surface of the unperturbated liquid is h0. The local tangent to the meniscus has the angle ψ with the horizontal. The gravity is represented by g.

The implications of this equation are discussed in the contexts of Titan, Enceladus and Europa. This analysis will be complemented by other discussions about bubbles and liquid droplets properties in extraterrestrial contexts.