Background: Some fundamental properties of the interiors of the Ice giants Uranus and Neptune are far from being understood. According to structure models which follow observed gravitational harmonics J2 and J4, the interiors are composed of a H/He-rich envelope transitioning into an ice-rock interior. Formation theories can explain their current structure given certain conditions related to the formation location within the protoplanetary disk nebula and the degree of gas depletion during said formation are met, conditions which themselves seek an explanation [1].

A rather sharp boundary yields the simplest solution to the gravity field [2] and the luminosity of the planets  [3]. Recently, the phase  separation of two major constituents (water and molecular hydrogen) in the evolved and cooled planets Uranus and Neptune has been proposed as an explanation for the presence of this sharp interface. Furthermore, different H2O/H2 demixing states may offer an explanation for the paradox between intrinsic heat flux of both planets [2]. On the other hand, evolution models guided by the observed luminosities suggest the existence of a compositional barrier inhibiting or slowing down convection. Assuming small differences in the structure of both planets, this mechanism can account for the faintness of Uranus and the brightness of Neptune [3]. However, their evolution could be affected by possible complementary processes such as phase separation [2] or condensation in their atmospheres.

In this work, we follow up on the possibility of demixing between the major constituents in the H-He-H2O system. First, we show that interior models which adjust to the luminosity [3] lead to temperatures above the critical temperature for H2O/H2 demixing to occur, and thus would predict a protosolar atmospheric helium abundance. Second, we adopt the assumption of an initially more homogeneous interior which did cool sufficiently to allow for H2O/H2 demixing [2]. We find that for deep interior H/He phase separation, which occurs at higher temperatures, favourable interior conditions were met much earlier in the evolution [4]. 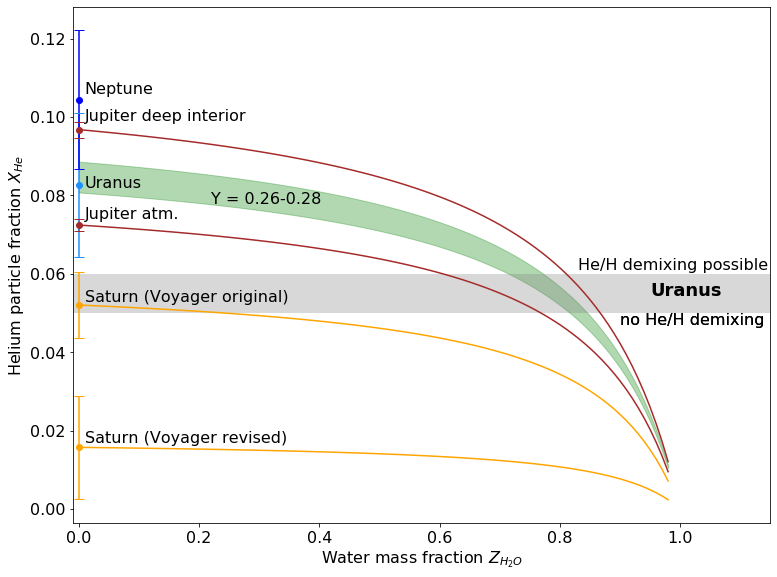 Figure 1: Helium particle fraction as a function of assumed water mass fraction in the deep interior of Uranus. Error bars placed at ZH2O= 0 show the observed atmospheric He abundances of Jupiter, Saturn, Uranus, and Neptune, while also a value for Jupiter's deep interior. The grey area delimits the uncertainty region marking the lower limit of He/H ratio necessary for phase separation to occur in Uranus. This figure shows how the He/H ratio relevant to H/He demixing behaves with the water abundance.

In Figure 1, we plot the He particle fraction as a function of the assumed water mass fraction in the deep interior assuming full dissociation of water and hydrogen. Protosolar values for the atmospheric helium abundance Y were adopted for Uranus (0.26-0.28). The grey region shows the uncertainty region above which H/He demixing can occur, inferred from the H/He non-ideal entropy phase diagram of [4]. Figure 1 shows H/He phase separation cannot take place in a highly ice-rich interior ZH2O greater ~0.85. However, moving towards lower water contents, demixing can occur at pressure levels between 1.5 to 4 Mbar [4]. The atmospheric helium abundance prediction we aim for could be compared to probed in-situ measurements in the future.

Acknowledgements:
The authors acknowledge support from the Research Unit 2440/2 funded by the DFG (Deutsche Forschungsgemeinschaft).