Main-belt comets are objects orbiting in the main belt, they have near-surface ice, supposed to be water ice, and it is surprising, because water ice is unstable against sublimation at the surface temperatures of asteroids at the distance of the main belt. This water content is important to better understand the thermal and compositional history of our Solar System, to place constraints on protosolar disk models, and to probe a potential primordial source of terrestrial water.

The main-belt asteroid 324P/La Sagra has been confirmed as main-belt comet by showing repeated dust emission activity during at least two subsequent perihelion passages. The nature of the dust emission in MBCs suggests that it is most likely driven by the sublimation of water ice.

We find the absolute R-band total magnitude and the estimated total dust mass of the object to be consistent with published results. We also confirm that the activity during the 2015 perihelion passage has significantly decreased compared to the previous perihelion passage in 2010 (Fig. 1). We analysed data in the period December 2011 - April 2019. We also study the recent activity of the main-belt comet 324P/La Sagra at the 2021 perihelion passage, to search for more changes that should provide insight into the evolution of MBC activity over time. Additionally, we measure the dust trail brightness profile of the main-belt comet 324P/La Sagra. From the debris trail brightness profile, we constrain the size of the largest particles that gas drag is able to lift, which is diagnostic of the sublimation rate. Understanding the ice content of outer main-belt asteroids is crucial to constrain the distribution of volatiles in the early solar system and the formation and subsequent evolution of planetesimals. 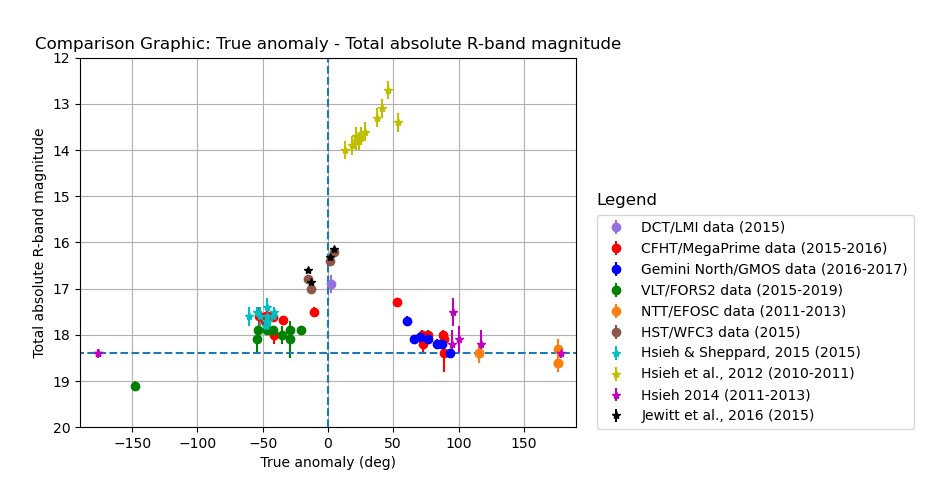 Figure 1: Absolute magnitudes measured in the central aperture of 324P as a function of orbital position. Circles refer to our analysis of archival data, while triangles are from the literature. After perihelion, the magnitude stabilises around a constant value (18.4 mag in R-band) near a true anomaly of 120°, indicating that dust production has ceased and that dust has left the immediate environment of the nucleus due to solar radiation pressure. An absolute magnitude of 19 measured at true anomaly of -150° indicates that the nucleus could be strongly elongated and be correspondingly faint during part of its rotational lightcurve.