The five major Uranian satellites provide important constraints on compositional and dynamical evolution in the Uranian system.  These bodies experienced endogenic activity in the past, morphologically distinct from those on Saturnian icy moons.  Uranian moons also exhibit compositional differences with their Saturnian counterparts.  Because our understanding of these bodies is based on the single 1986 Voyager flyby and telescope observations, much remains to be discovered and understood about how these moons formed and evolved.

The five major Uranian moons (diameters 930 to 1575 km and best density estimates of ~1.2 to 1.7 kg/m3)form a regular family of ice-rich planetary bodies, and record accretional conditions in the Uranian system.  Voyager 2 mapping of <40% of their surfaces provides our only resolved record of these worlds [1,2]. Earth- and space-based telescope observations provide additional constraints. Here we review these moons in context with the Saturnian system, with a view towards the now likely return to the Uranian system as a major NASA Flagship.

Uranian satellites are markers of the composition of the region they formed in. Telescope observations indicate surface compositional differences from Saturnian moons. Saturnian moons have bright surfaces with strong H2O ice absorption bands (except Iapetus’ dark), partly due to E-ring deposition [e.g., 3]. Uranian moons have darker surfaces of H2O-ice mixed with spectrally neutral components possibly rich in organics and/or hydrated silicates. CO2 on Saturnian moons is complexed with other species (except CO2-ice on Enceladus) [4,5]; CO2 is in crystalline form on Uranian moons [4,5].

Radioactive heating estimates range from ~0.1 mW/m2 for Miranda (similar to Mimas) to ~0.7 mW/m2 for Ariel/Umbriel (similar to Dione/Rhea, but three orders magnitude less than measured at Enceladus) to ~1.1 mW/m2 for Titania/Oberon [12].  If Uranian moons preserve liquid, it is likely as residual oceans < 30 km thick, or brine-filled porous cores [12]. Miranda is unlikely to preserve liquid presently unless recently tidally heated.

The five Uranian moons betray various levels of tectonic activity, from deep walled troughs of Ariel (Fig. 2) to cryptic deep features on Umbriel’s limb [2,7].  Some are ancient but global extent and associated stresses are uncertain due to mapping limits.  (Cryo)volcanism of higher relief than in the Saturnian system is widespread on Miranda and Ariel (and unresolved on the others) but composition and eruption state are poorly known [7]. 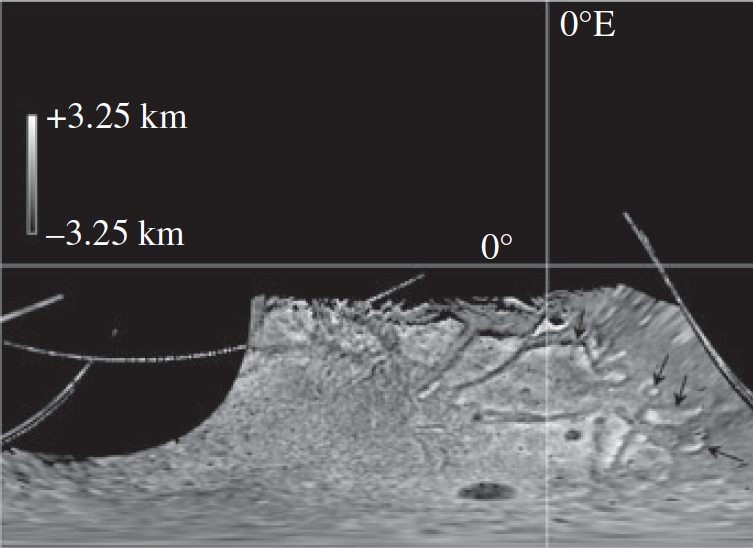 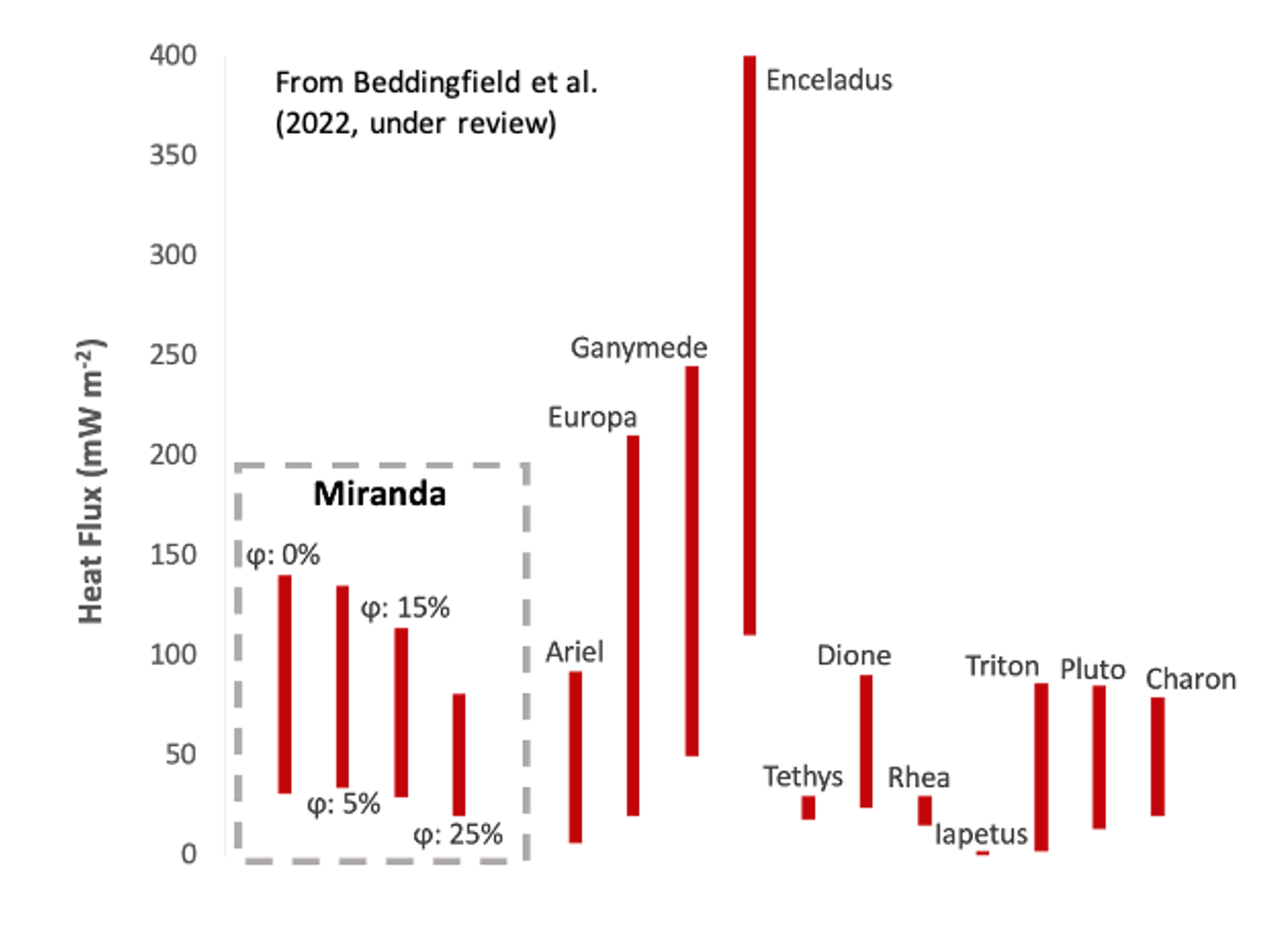 Like Saturn’s icy moons, the five major Uranian satellites are diverse, from little geologic activity to near global resurfacing as little as ~0.1 Gyr ago [17].  The two satellite systems are not identical, representing formation in distant compositionally distinct part of the Solar System, and under possibly much different formation conditions.  Cassini showed the value of a dedicated orbiter with instrumentation across the spectrum. Aside from resurfacing of Dione, Tethys, and esp. Enceladus [18], Cassini revealed magnetospheric and ring particle surface alterations [18, 19], satellite ring deposition [18,20] and other processes. Whether these occur(red) in the Uranian system must await a dedicated Uranian orbiter.  Such observations and interior property constraints from close encounters, will allow better understanding of formation processes of these moons and the Uranian system.