Titan, the largest satellite of Saturn, has a dense atmosphere mainly composed of nitrogen and methane at a percent level. These two molecules generate a complex prebiotic chemistry, a global haze, most of the cloud cover and the rainfalls which model the landscape. Methane sources are located in liquid reservoirs at and below the surface and it sink is the photodissociation at high altitude. Titan’s present and past climates strongly depend on the connection between the surface sources and the atmosphere upper layers. Despite its importance, very little information is available on this topic.

In the last two decades, the observations made by the Cassini orbiter and the Huygens probe have greatly improved our knowledge of Titan’s system. The surface, haze, clouds, and chemical species can be studied and characterised with several instruments simultaneously. On the other hand, some compounds of its climatic cycle remain poorly known. This is clearly the case of the methane cycle, which is, however, a critical component of Titan’s climate and of its evolution.

We reanalysed four solar occultations by Titan’s atmosphere observed with the infrared part of the Visual Infrared Mapping Spectrometer (VIMS) instrument. These observations were already analysed (Bellucci et al., 2009, Maltagliati et al., 2015), but here we used significantly improved methane spectroscopic data. We retrieved the haze properties (not treated previously) (Figure 1) and the mixing ratios of methane (Figure 2), deuterated methane, and CO in the stratosphere and in the low mesosphere.

We find that the methane mixing ratio in the stratosphere is much lower (about 1.1%) than expected from Huygens measurements (about 1.4 to 1.5%). However, this is consistent with previous results obtained with CIRS. Features in the methane vertical profiles clearly demonstrate that there are interactions between the methane distribution and the atmosphere circulation. We find a layer rich in methane at 165 km and at 70°S (mixing ratio 1.45 ± 0.1%) and a dryer background stratosphere (1.1 − 1.2%). In absence of local production, this reveals an intrusion of methane transported into the stratosphere, probably by convective circulation. On the other hand, methane transport through the tropopause at global scale appears quite inhibited. Leaking through the tropopause is an important bottleneck of Titan’s methane cycle at all timescales. As such, it affects the long term evolution of Titan atmosphere and the exchange fluxes with the surface and subsurface reservoirs in a complex way. 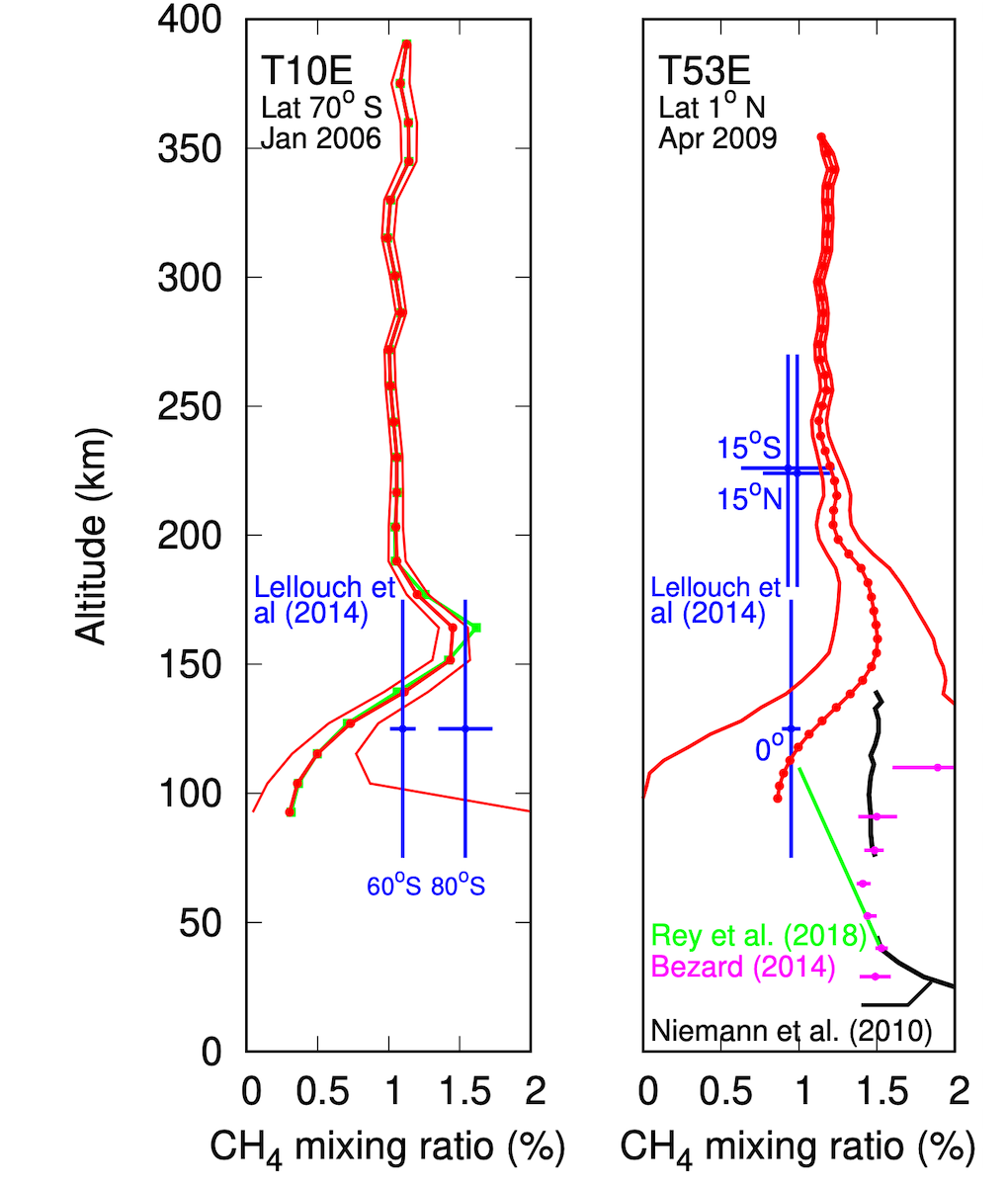 We also retrieved the haze extinction profiles and the haze spectral behaviour. We find that aerosols are aggregates with a fractal dimension of Df ≃2.3±0.1, rather than Df ≃2 as previously thought. Our analysis also reveals noticeable changes in their size distribution and their morphology with altitude and time. These changes are also clearly connected to the atmosphere circulation and concerns the whole stratosphere and the transition between the main and the detached haze layers.

We conclude that, to fully understand these results, Global Climate Models accounting for haze and cloud physics, thermodynamical feedbacks and convection are needed. Especially, the humidificaton of the stratosphere, at the present time and its evolution under changing conditions at geological timescale appears as a key process, and our work provide strong constraints to guide studies.