Introduction: Ganymede´s surface can be subdivided into dark and light terrain [1]. The dark terrain covers 35% of the surface, is composed of relatively low albedo material and high crater density. The 65% light terrain is characterized by higher albedo and a lower crater density indicating a relatively younger age [2]. Omnipresent morphotectonic structures such as grooves within the light terrain suggests a more recent activity of this terrain with respect to the dark terrain. The assemblage of lineated grooves has been interpreted as extensional zones similar to the Earth continental rifts, resulting from a global expansion that affected the satellite crust in the past [3]. Figure 1a and b show the spatial distribution of Ganymede’s dark terrain. 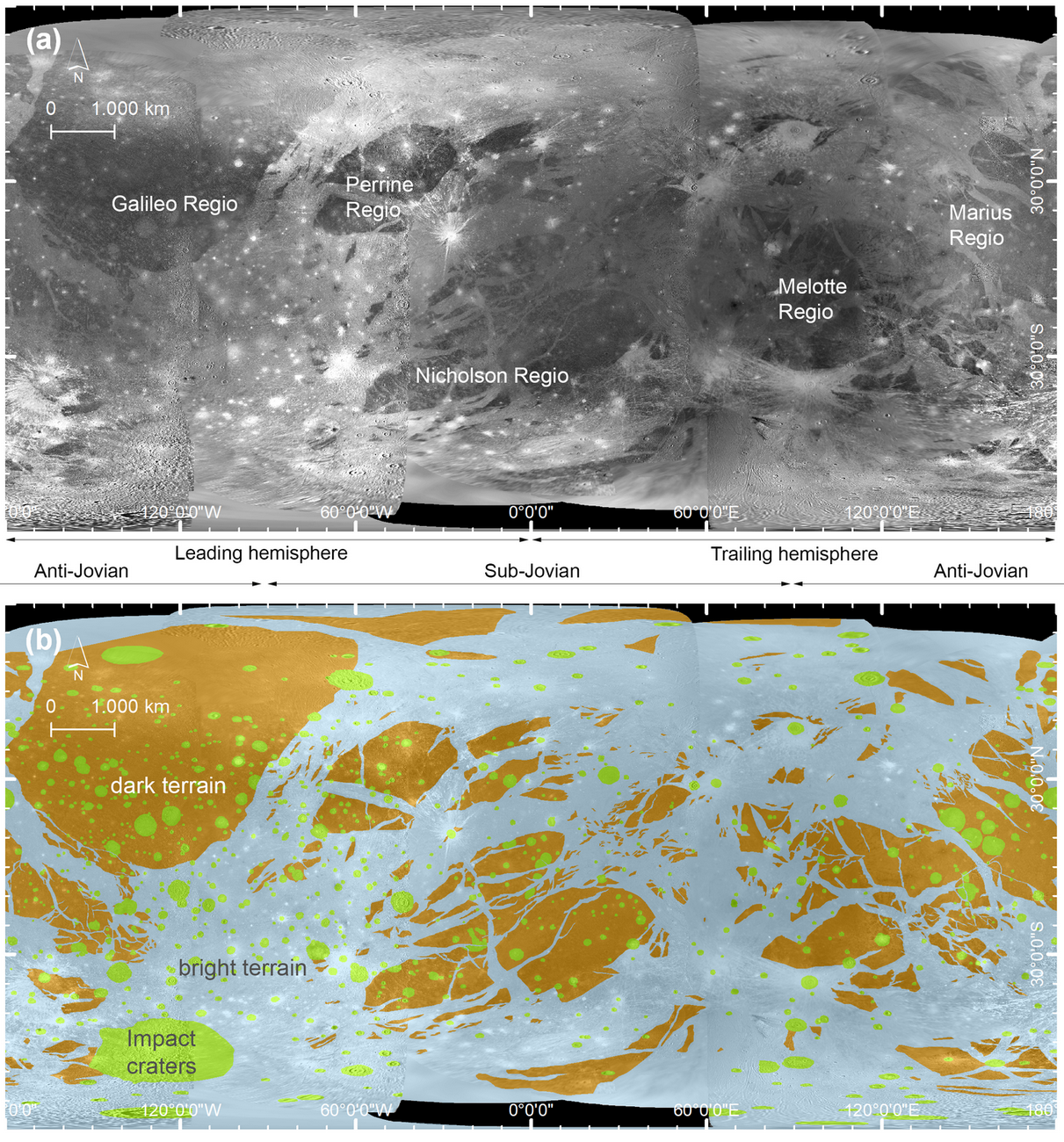 Figure 1: Global Mosaic and terrain distribution. (a): Global mosaic of the surface of Ganymede by images of Voyager 1+2 and Galileo Solid State Imagery (SSI) (Becker et al., 2001; Schenk, 2010). (b): Simplified geological map displaying the distribution of the bright and dark terrains as well as impact craters. Data from [1].

Objectives: Neighboring dark terrains (see Fig. 1a and b) often show obvious fitting pattern with respect to their external shape, suggesting that the areas have drifted apart by extension. We intend to reconstruct magnitude and orientation of the finite extension between adjacent dark terrains by restoring their original shape. The kinematic restoration allows to better understand the global tectonic movement pattern and may ultimately help to address the issue whether the individual dark terrains once formed a single terrain covering the entire, smaller moon surface.

Methods: We used the global Ganymede image mosaic that was compiled by using a combination of Voyager 1 and 2 and Galileo images. [4-6]. The mosaic from the USGS can be found at the Annex of the PDS Cartography & Imaging Sciences Node (SIM 3237). Using ESRI's ArcMap 10.7 software polygons of all dark terrains were created in accordance to the geological mapping by [1]. When translating and rotating dark terrain polygons, there is the fundamental problem of distortion according to the projection in use. We therefore defined 32 regions, where dark terrains are particularly abundant and centered the stereographic projection upon every of these regions to minimize the distortion and maintained the angles when shifting the polygons. An example of the translation process is shown in Fig. 2. For every patch a repetitive procedure is chosen to reverse the extensional movements and shift the polygons back together. This repeats until finally all of the dark terrains more or less match up along their borders. The relative movement vectors on the sphere can then be computed by taking the centroid of each polygon both in the original and the final shapefile. The resulting vectors (Fig. 4) represent magnitude and direction of the extension of dark terrains since its break-up.

Results and Discussion: Figure 3 shows the results of the shifting and fitting procedure of the dark terrain polygones. Figure 3a shows the distribution of dark terrains in their present day position. Figure 3b shows the regional closure of smaller rift zones in each of the patches. Figure 3c shows the result of closing large gaps and Figure 3d a step towards a hypothetic “super-dark-terrain”. With increasing distance between the dark terrains, the reconstruction becomes more difficult and is not always unambiguous. Figures 4a and b show the translation vectors centered to the midpoint of each dark terrain and a possible “break-up” center with the deviation of each vector thereof. Vectors are color-coded with respect to the displacement between the present-day position (arrow origin) and the position after restoration (arrowhead). Vectors show a complex displacement pattern that is not solely the result of a ballooning effect but also indicates movements by intrinsic forces. 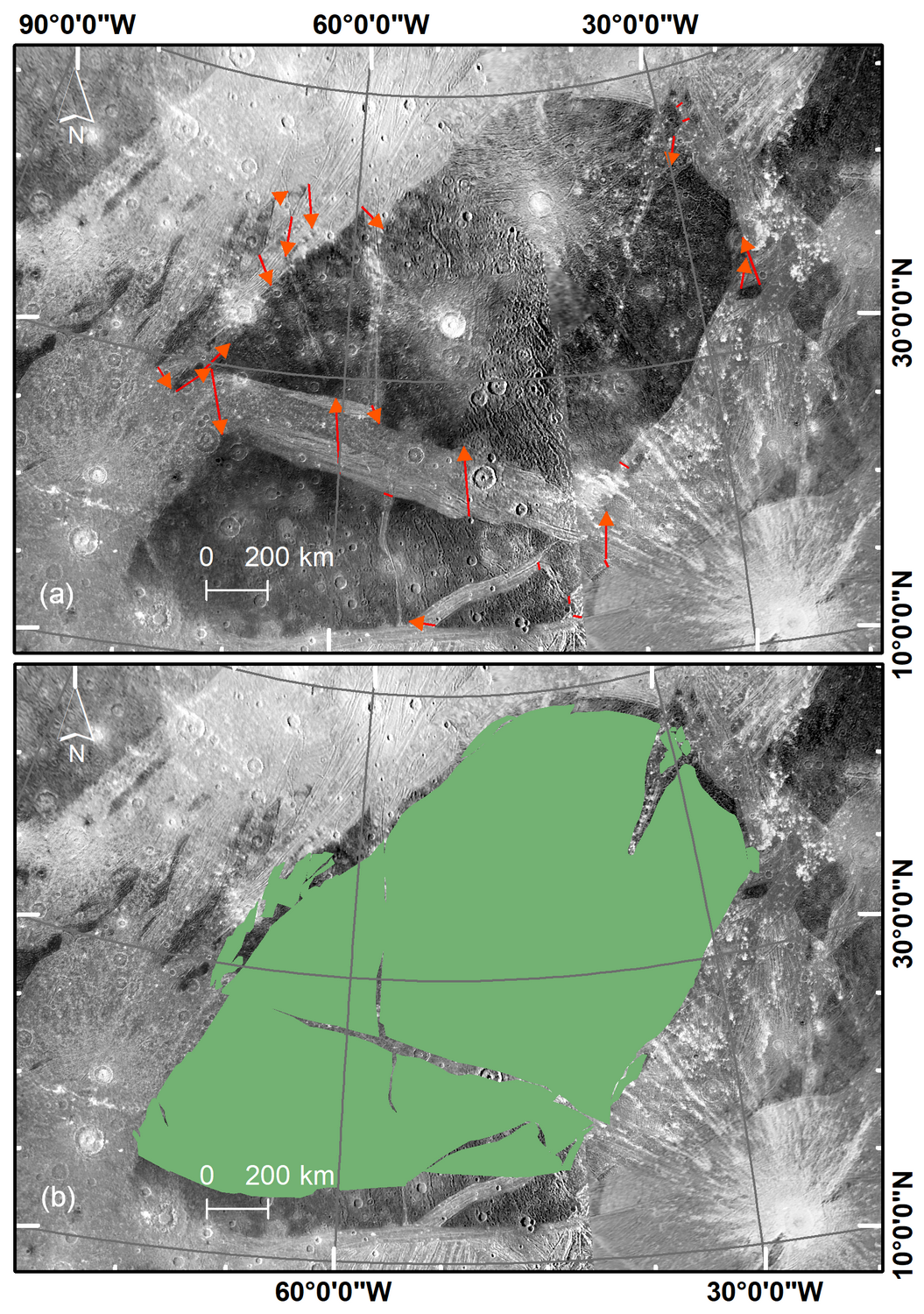 Figure 2: Example of the translation process of Perrine Regio (Stereographic Projection). (a) Dark terrains with indication of piercing points (arrows). (b) final small-scale restoration. An obvious fitting pattern along the edges of adjacent dark terrains is clearly visible and can be inferred by extensional tectonism. 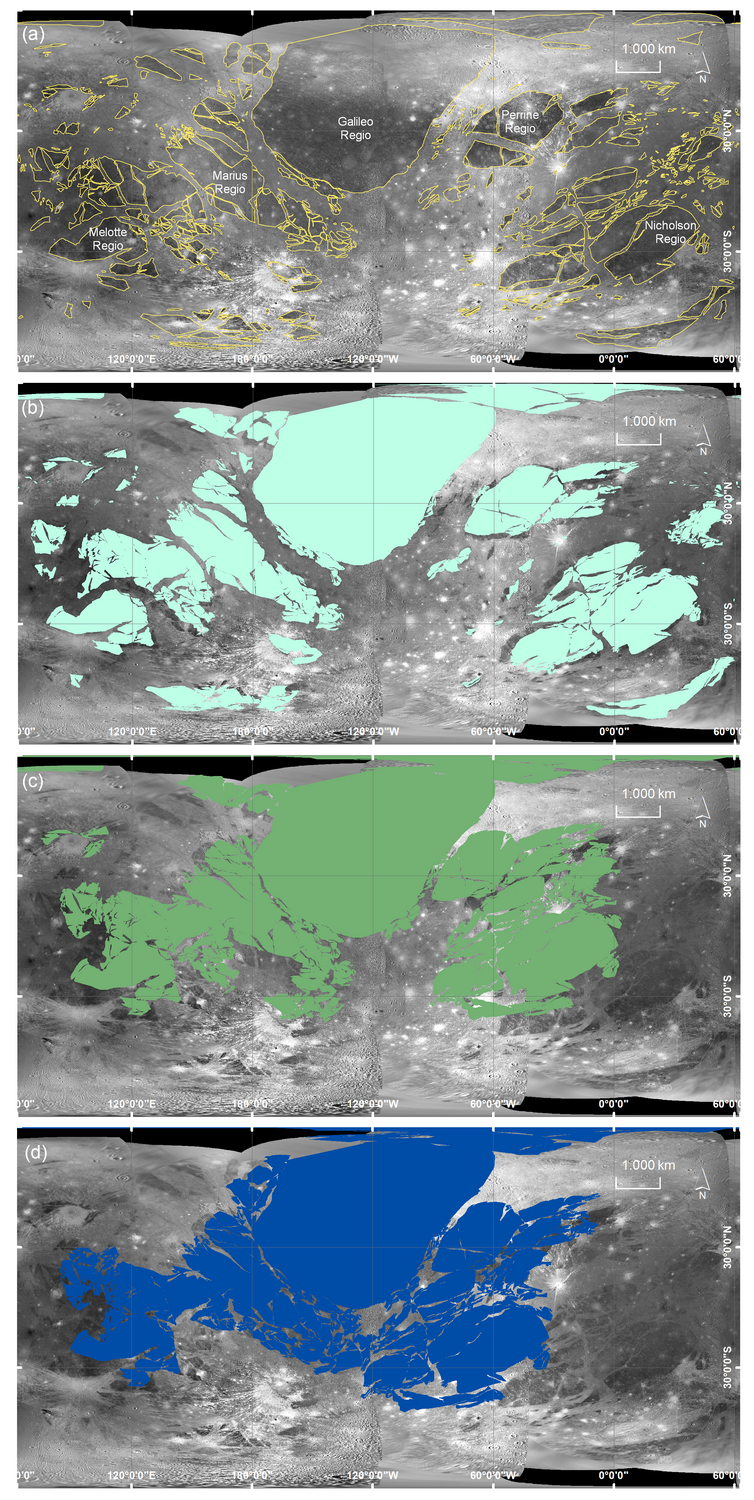 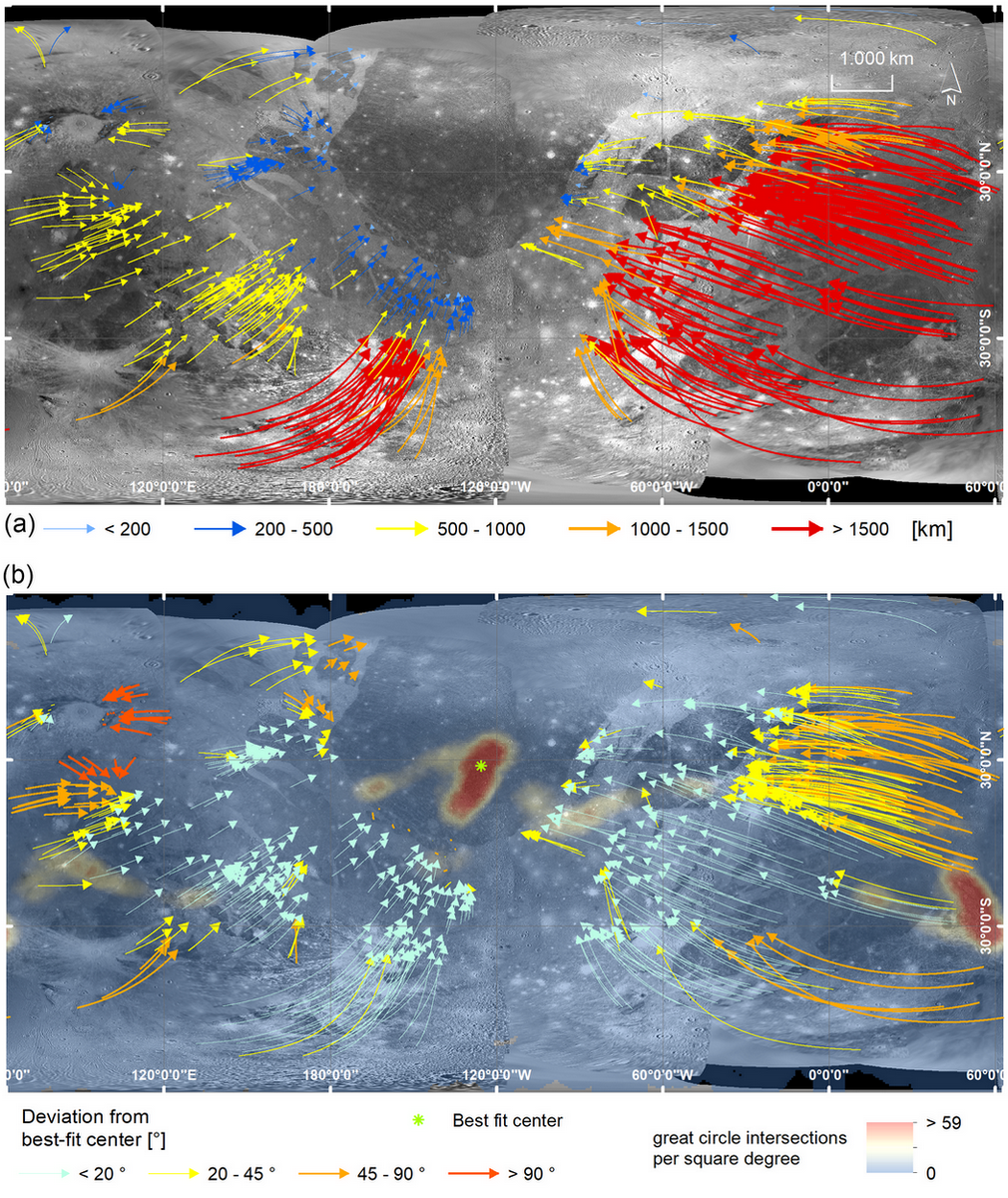 Figure 4: (a): Translation vectors of the centroids between the present-day position (arrow origin) and the restored polygons (arrow head). The color-code represents the absolute distance on a great arc segment and ranges from 0 km up to a maximum of more than 2700 km. (b): Distribution (heatmap) of the intersection points of every two great circles derived from the translation vectors of each polygon and deviation in degrees (color-coded as indicated) of each translation vector from the direct path towards the best-fit center (green dot) inside the area of the most great-circle intersections.

At present, our reconstruction gives no indication of the timing of the rift events because the tectonic signatures of the light terrains have not yet been considered. In addition, the movements are to be understood as relative movements, since an absolute reference system is missing. Due to the uneven spatial resolution of the available data, reconstructions are inaccurate or impossible in some areas. The planned JUICE mission [7] will remedy this situation.