A holistic aerosol model for Uranus and Neptune, including Dark Spots

Previous studies of the reflectance spectra of Uranus and Neptune concentrated on individual, narrow wavelength regions, inferring solutions for the vertical structure of gases and aerosols that work well for the wavelength range fitted, but not elsewhere. This has made it difficult to interpret these works with respect to the underlying physical structures. Here we searched for a model of the vertical distribution of haze and methane abundance that fits the whole 0.3 – 2.5 µm range simultaneously, determining more robust solutions.

We reanalysed a set of observations from: HST/STIS (0.3-1.0 µm), IRTF/SpeX (0.8-2.5 µm), and Gemini/NIFS (1.4-1.8 µm).  Using a Minnaert limb-darkening model, we were able to partially disentangle cloud opacity and cloud absorbing effects, resulting in a model of the vertical distribution of aerosols and methane that is consistent with the observed reflectivity spectra of both planets and fits all wavelengths simultaneously. This model consists of three main components:  Aerosol-1) a deep aerosol layer with a base pressure > 5-7 bar, assumed to be a mixture of H2S ice and photochemical haze; Aerosol-2) a layer of photochemical haze/ice, coincident with a layer of high static stability at the methane condensation level at 1-2 bar; and Aerosol-3) an extended layer of photochemical haze, likely mostly of the same composition as the 1-2-bar layer, extending from this level up through to the stratosphere, the likely origin of the photochemical haze particles. For Neptune, we also need to add a thin layer of micron-sized methane ice particles (Aerosol-4) at ~0.2 bar to explain the enhanced reflection at longer methane-absorbing wavelengths. We suggest that methane condenses onto the haze particles at the base of the 1-2-bar Aerosol-2 layer and forms ice/haze particles that grow very quickly to large size and immediately ‘snow out’, as predicted by Carlson et al. (1988). We suggest that these particles re-evaporate at deeper, warmer levels to release their core haze particles to act as condensation nuclei for H2S ice formation in the Aerosol-1 layer (Fig. 1). 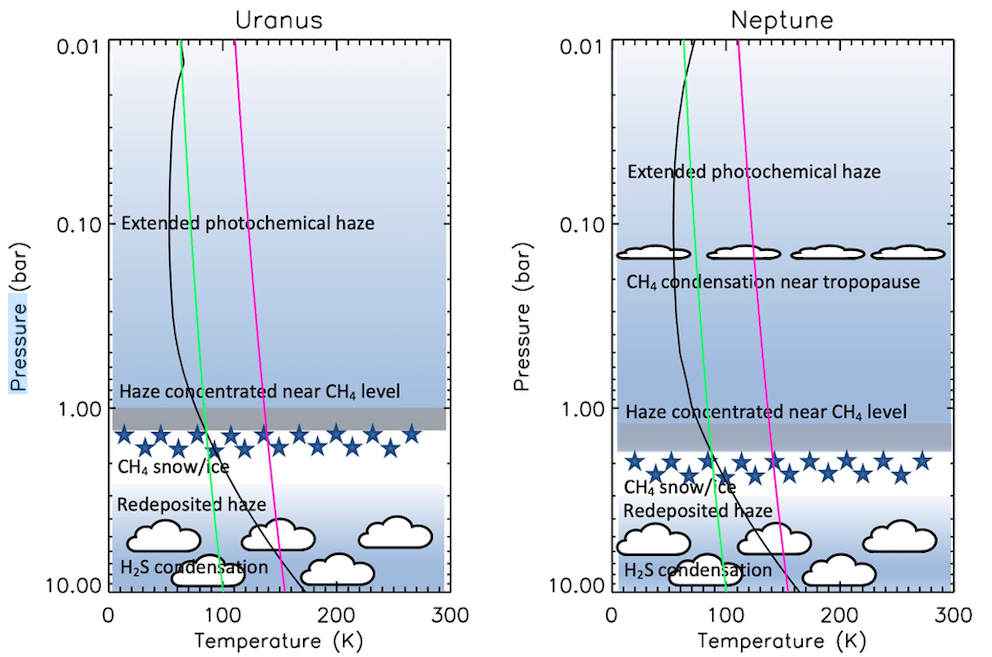 Figure 1. Summary of retrieved aerosol distributions for Uranus (left) and Neptune (right), compared with their assumed temperature/pressure profiles. On each plot are also shown the condensation lines for CH4 (green) and H2S (pink), assuming 10-bar mole fractions of 4% for CH4 and 0.001 for H2S, to move the condensation levels to the approximate levels of the Aerosol-1 and Aerosol-2 layers.

We find that the particles in the 1-2 bar Aerosol-2 layer have the greatest impact on the overall colour of Uranus and Neptune. These particles would appear mostly white in the visible, but become increasingly absorbing at blue/UV and near-IR wavelengths. The Aerosol-2 layer on Uranus has approximately twice the opacity as the same layer on Neptune, giving Uranus a paler blue-green colour than the deeper blue of Neptune, and also explains why Uranus is darker than Neptune at UV wavelengths as can be seen in Figs. 2 and 3. 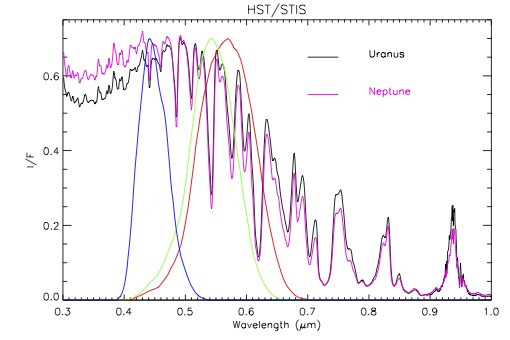 Figure 2. HST/STIS I/F spectra of Uranus and Neptune averaged along the central meridian of these planets. Also overplotted, for reference are the red, green, blue sensitivities of the human eye.

Figure 3. Modelled appearances of Uranus and Neptune. The right-hand column shows the simulated ‘observed’ appearance of Uranus and Neptune, reconstructed using the fitted Minnaert limb-darkening coefficients extracted from HST/STIS data. The spectra across the discs were convolved with the Commission Internationale de l’Éclairage (CIE)-standard red, green, and blue human cone spectral sensitivities to yield these apparent colours. The preceding columns show how our modelled appearance of these planets changes as we add different components to our radiative-transfer model.

For the deeper Aerosol-1 layer, a darkening of this layer (or possibly, but less likely, a clearing of the aerosols) provides a good match to the observed spectral properties of dark spots on Neptune, such as the Great Dark Spot observed on Neptune in 1989 by Voyager-2 (Fig. 4), and the more recent NDS-2018 spot, first observed by HST/WFC3 in 2018 (Fig. 5). Such spots are seen to have maximum visibility at ~500 nm, but are invisible at UV wavelengths and also at wavelengths longer than 700 nm. We will discuss the dynamical implications these conclusions have on the possible structure of such dark spots. 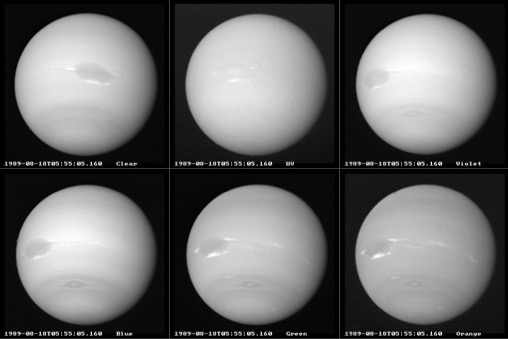 Figure 5. Observed and reconstructed HST/WFC3 images of Neptune made in 2018. Top: observations with the NDS-2018 feature at upper left and a dark lane at 60°S at lower right. Middle: images reconstructed from our fits to the HST/STIS data, but also including a hole in the deep Aerosol-1 layer (p>5-7 bar) near the central meridian at 15°N, and a clearing at 60°S. Bottom: a second set of images reconstructed from our fits, but where the Aerosol-1 layer is instead darkened near the central meridian at 15°N and at all longitudes at 60°S.

Finally, the homogenous haze layer near the 1-2 bar methane condensation level can be explained by a layer of high static stability caused by the release of latent heat and by the significant decrease with height of the mean atmospheric molecular weight caused by methane condensation, which has a large deep abundance (~4%) and is much heavier than the surrounding H2-He air. Methane condensation would quickly form very large ice particles at the base of this haze layer that immediately ‘snow out’, explaining why a layer of methane ice is not found at its condensation level. Limited mixing from the potential static stability barrier at 1-2 bar could permit external CO entering Neptune’s atmosphere to be trapped in the upper troposphere, removing the need for extreme internal oxygen enrichment in order to explain the wide wings in Neptune’s sub-mm CO lines.