Titan's atmosphere has one of the most complex chemistry of the Solar System. On the one hand, its two main compounds, nitrogen and methane, are dissociated at high altitude by energetic solar photons and charged particles coming from the Saturnian magnetosphere. They produce a set of complex molecules that generates a layer of photochemical haze which completely covers Titan. On the other hand, there is a methane cycle similar to the hydrological cycle established on Earth (evaporation, condensation, precipitations and presence of rivers and lakes on the surface). Haze, methane and clouds are subject to coupled cycles that are not completely understood. They also contribute to the thermal equilibrium and long-term evolution of Titan. It is therefore important to better characterize these cycles and their interactions.

1. Principle of the work

The temperature profile of the satellite allows methane to condense, when it is transported upwards, on the aerosols which serve as a support for nucleation. Thus, after evaporation from the surface reservoirs, methane clouds are produce, precipitate, and return to the surface [Stofan et al., 2007]. The minor species created at high altitude also condense during their transport to the lower layers. These clouds have long been observed thanks to telescopes, and then to Cassini's instruments [Rodriguez et al., 2011]. Cloud activity has also been modeled from physical principles in the 2-D GCM (altitude-latitude) of IPSL [Rannou et al., 2006] and by simple models with other 3-D GCMs (e.g. [Mitchell et al., 2006] and [Lora et al., 2019]).

The Global Climate Model of Titan developed at the Institut-Pierre-Simon-Laplace is the ideal tool to understand how these cycles work and how clouds form on Titan. The transition of the model in 3 dimension has significantly improved our knowledge of the mechanisms of Titan's middle atmosphere [Lebonnois et al., 2012]. The microphysical processes associated with haze have been implemented long time ago. We now have added the clouds microphysics (methane, ethane, hydrocyanic acid, etc.) and we further plan to add convective aspects. Aside from that, the morphological structure (fractal dimension) of aerosols has also been questioned recently and is likely to modify the thermal equilibrium of the atmosphere, haze-dominated in the stratosphere. These are the two axes that we will explore in our work.

In this presentation, we will first discuss the impact of changing aerosol structure on the haze cycle and the consequences for the thermal equilibrium of the atmosphere. Recent works show that aerosols appear more compact than previously thought (with a fractal dimension Df ∼ 2.3 instead of Df ∼ 2.0). We studied the effects induced by such a change (change of vertical profiles, annual cycles, aerosol size, etc.). For example, Figure 1 shows the haze extinction in Titan's atmosphere depending on the pressure and latitude for two values of the aerosol fractal dimensions. 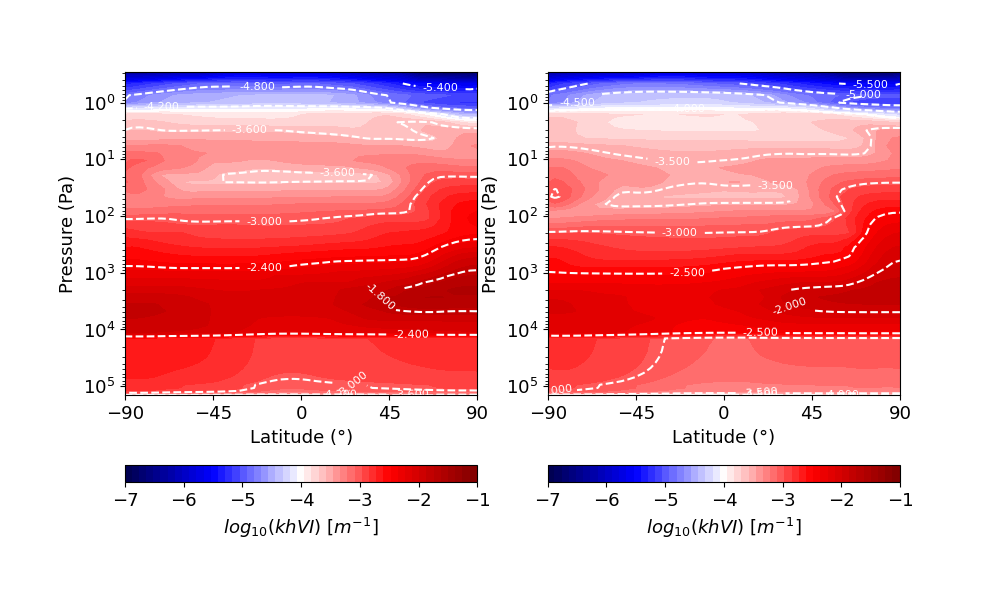 We will detail the consequences on the structure of the haze and on the thermal equilibrium in the stratosphere (figure 2). 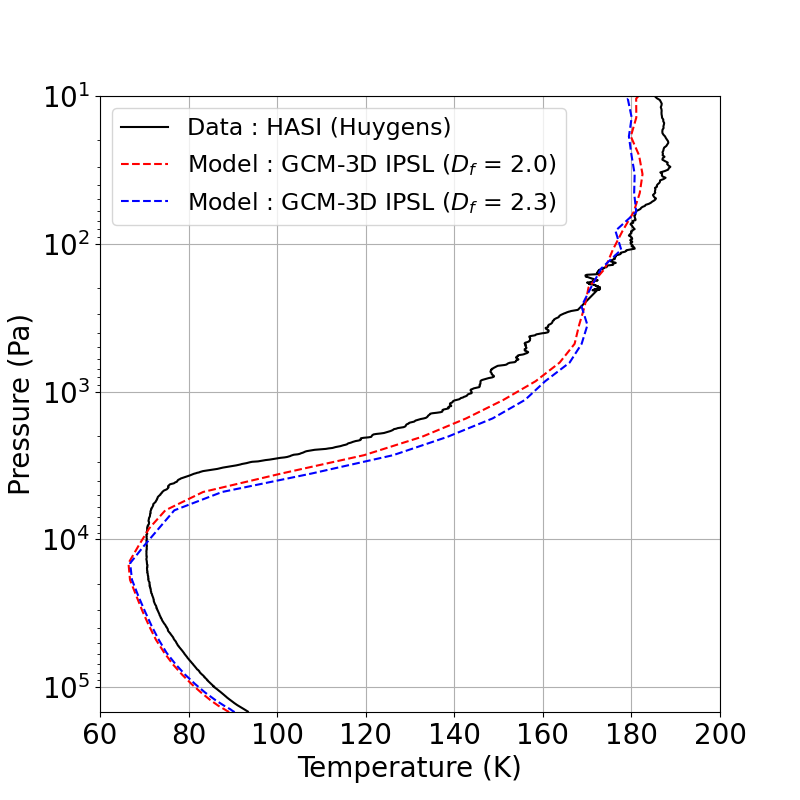 Next, we will describe the general principle of the cloud model used in the GCM and show the first results obtained. We will display the comparisons, on the one hand with observations and on the other hand with other models. This first step aims at recovering, in the 3-D GCM, the level of coupling previously reached in the 2-D model. We will also discuss the missing processes in the model and the strategy to account for. The main missing process is the convective cloud process, which have been observed.

This project is naturally in line with the upcoming observations of the JWST, the future Dragonfly mission and all other future missions. This model will allow the best possible characterisation of the climate expected in the Dragonfly landing region. Of course, it will also be a question of providing all possible elements necessary for the understanding of future observation of Titan.