Updated radiative transfer model for Titan in the near-infrared wavelength range: Validation on Huygens atmospheric and surface measurements and application to the analysis of the VIMS/Cassini observations of the Dragonfly landing area

Titan is the only moon in the solar system with a thick atmosphere, dominated by nitrogen and organic compounds and methane- and ethane-based climatic cycles similar to the hydrological cycle on Earth. Hence, Titan is a prime target for planetary and astrobiological researches. Heaviest organic materials resulting from atmospheric chemistry (including high atomic number aerosols) precipitate onto the surface and are subject to geological processes (e.g., eolian and fluvial erosion) that lead to the formation of a variety of landscapes, including dune fields, river networks, mountains, labyrinth terrains, canyons, lakes and seas analogous to their terrestrial counterparts but in an exotic context. Its optically thick atmosphere, however, prevents the surface from being probed in the entirety of the near-infrared (NIR) range, and its composition is still largely unknown, or largely debated at the least, preventing to fully understand and quantify the geological processes at play. Incident and reflected solar radiations are indeed strongly affected by gaseous absorption and aerosol scattering in the NIR. Only where the methane absorption is the weakest, a few transmission windows allow the detection of radiation coming from the low atmosphere and the surface, making possible to retrieve the surface albedo. In the 0.88-5.11 μm range (VIMS-IR channel), the Visual and Infrared Mapping Spectrometer (VIMS) instrument on board the Cassini spacecraft has shown that the surface can be observed in eight narrow transmission windows centered at 0.93, 1.08, 1.27, 1.59, 2.03, 2.69, and 2.78 μm, and in the 5.0-5.11 μm interval. Even in these transmission windows, residual gaseous absorption and increasing scattering from aerosols with decreasing wavelength make the analysis of the surface signal and the retrieving of surface albedo complex and delicate.

In order to retrieve the surface albedo in the atmospheric windows in the most possible rigorous way, we have developed a radiative transfer (RT) model with up-to-date gaseous abundances profiles and absorption coefficients and improved photochemical aerosol optical properties. We validated our model using in situ observations of Huygens-DISR (Descent Imager / Spectral Radiometer) acquired during descent and once landed. We then applied our RT model to the Selk crater area (the Dragonfly mission landing area) in order to map the surface albedo and discuss the surface properties of the different geomorphological units of the region.

Our RT model is based on the SHDOM solver to solve the RT equations using the plan-parallel approximation. Vertical abundance profiles and absorption lines of CH4 and isotopes, CO, C2H2 and HCN are implemented using the most recent studies. Correlated-k coefficients are used to calculate gases absorption coefficients at VIMS-IR spectral sampling and resolution. Aerosols extinction profile and single scattering albedo are described using a fractal code developed by [1], allowing the aerosol fractal dimension to be varied. Aerosols phase function is modified using a multi-angular VIMS sequence (Sébastien Rodriguez, personal communication). Our model is validated using the in situ observations of Huygens-DISR acquired during the complete descent sequence and once landed.

We applied our RT model to the Selk crater region by inverting aerosol opacity and surface albedo over 4 VIMS cubes (1578266417_1, 1575509158_1, 1578263500_1, 1578263152_1) acquired over the area. We built local maps of aerosol opacities and surface albedos of the Selk region by combining the 4 VIMS cubes on a geographically projected mosaic (see the mosaic of the 4 raw VIMS observations in Fig. 1). A few longitudinal profiles of the retrieved atmospheric properties are shown in Fig. 2. Slopes and seams between cubes of the aerosol opacities, originally due to varying observation geometries between flybys, have been entirely corrected, confirming the robustness of our RT model and making the retrieved surface albedo more reliable. Retrieved surface albedo have been then corrected for the photometry using in-situ observations ([3]). The resulting albedo maps of the regions are highly contrasted and homogeneous, most of the seams between cubes (due to residual surface photometry) being corrected (Fig. 3). 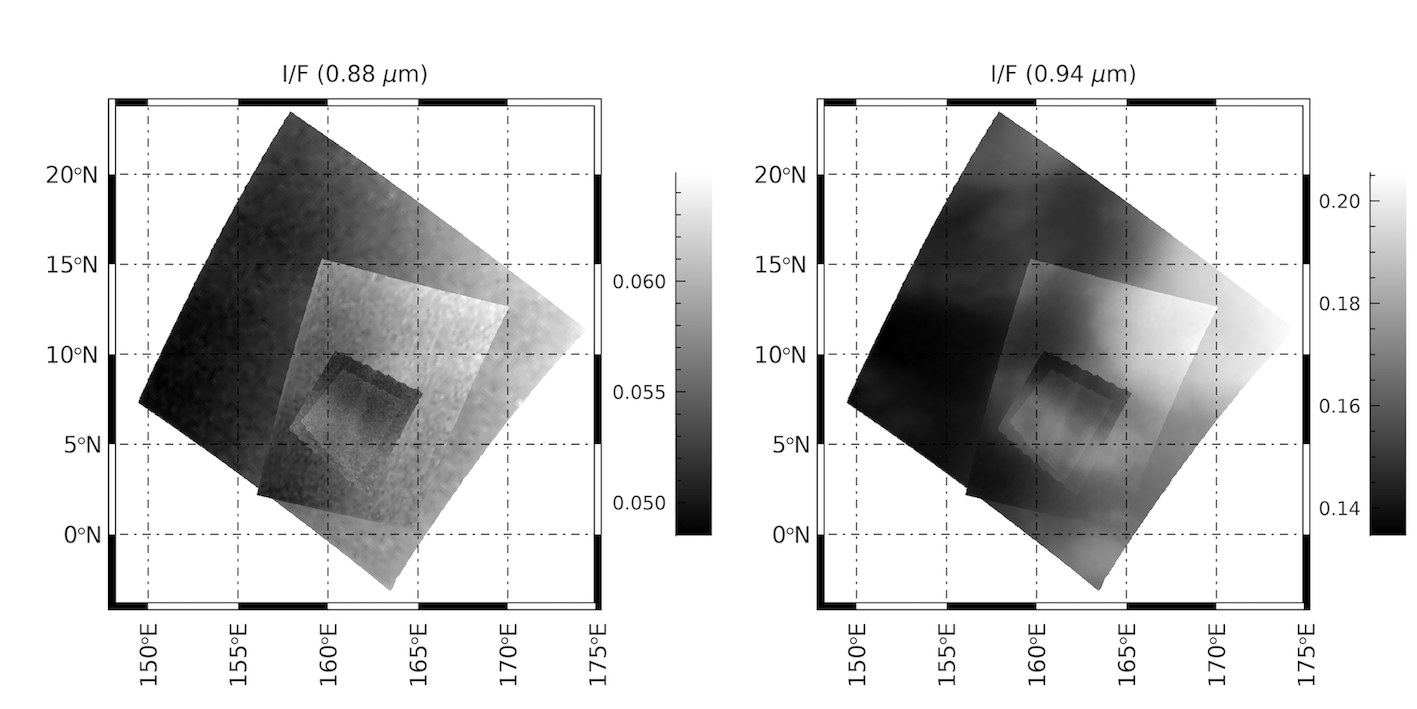 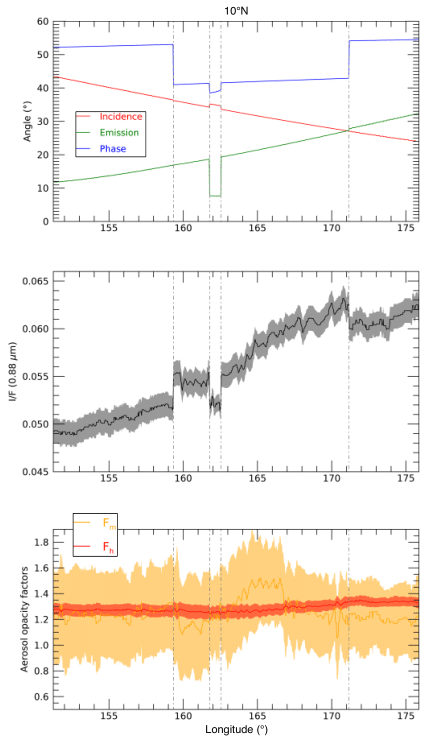 We developed and validated a new RT model for Cassini-VIMS observations of Titan with up-to-date atmospheric optical description. Coupled with an efficient inversion scheme, our model can be apply to the complete VIMS dataset for the retrieval of Titan’s atmospheric opacities and surface albedos at regional and global scales.