Introduction. The ASI Space Science Data Center (SSDC) has a long-standing experience in space data management. Among its tools, MATISSE (Multi-purpose Advanced Tool for Instruments for the Solar System Exploration [1]) was created in 2013 to search, visualize and analyze data from planetary exploration missions. MATISSE, whose v2.0 update [2] is available at https://tools.ssdc.asi.it/Matisse/, allows users to analyze data from different missions, such as NASA Messenger and NASA Dawn, and the possibility of visualizing the data directly on the 3D shape of the targets greatly helped in reaching stunning scientific results. The work here presented points at improving and expanding the functionalities of the MATISSE tool for the Mercury explorations, by including the possibility to merge together the outputs of a thermophysical code of Mercury surface and the study of planet’s surface from a geological point of view.

MATISSE for Mercury exploration. The ESA-JAXA BepiColombo mission is the first European mission to Mercury; the spacecraft will study in detail the surface, the exosphere and the magnetosphere of the planet. We have developed a thermophysical model with the aim to analyze the dependence of the temperature of the surface and of the layers close to it on the assumptions on the thermophysical properties of the soil. The code solves the one-dimensional heat equation, assumes purely conductive heat propagation and no internal heat sources; the surface is assumed to be composed of a regolith layer with high porosity and density increasing with depth. Calculations have been carried out to analyze the thermal response of the soil as a function of thermal conductivity. The model has been also used to study the sodium content in the planet's exosphere, whose origin is under investigation [3]; the MESSENGER mission has measured the exospheric sodium content as a function of time, detecting an increase at the "cold poles" (so called because of their lower than average temperature). In order to study the effect of surface temperatures on the sodium content in the exosphere, the temperature distribution calculated with the code has been used together with an atmospheric circulation model that calculates the exospheric sodium content [4]. 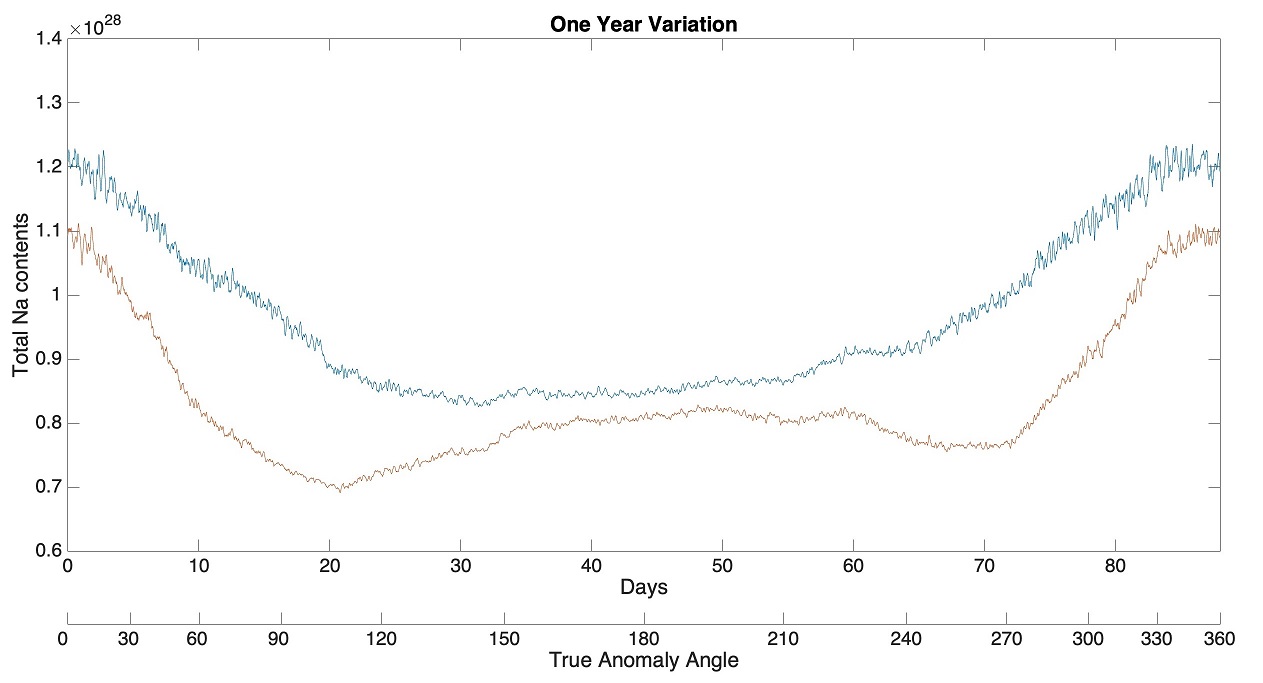 A simplified version of the thermophysical code is available to the scientific community through MATISSE and, therefore, it could be crucial to interpret the data acquired by the instruments on board the BepiColombo mission, especially if it is taken into account that, through MATISSE, it is possible to analyze the surface of Mercury with data from NASA Messenger based on queries looking for specific geological units (as is already possible for Mars, Mercury and Ceres).

Thanks to the data from the MDIS (Mercury Dual Imaging System [5]) camera on board the MESSENGER, it was possible to create a global map of the planet's surface. The identified lithologies can be analyzed and subsequently uploaded to our MATISSE tool in order to have the possibility to study the surface of Mercury directly from the site.

On MATISSE it will be possible to select the data not only with the usual geographical coordinate, but on the basis of geological maps, so that the user can analyze observational and modeled data collected on areas with well-defined geology that allow to study the effects of the heterogeneity of surface. 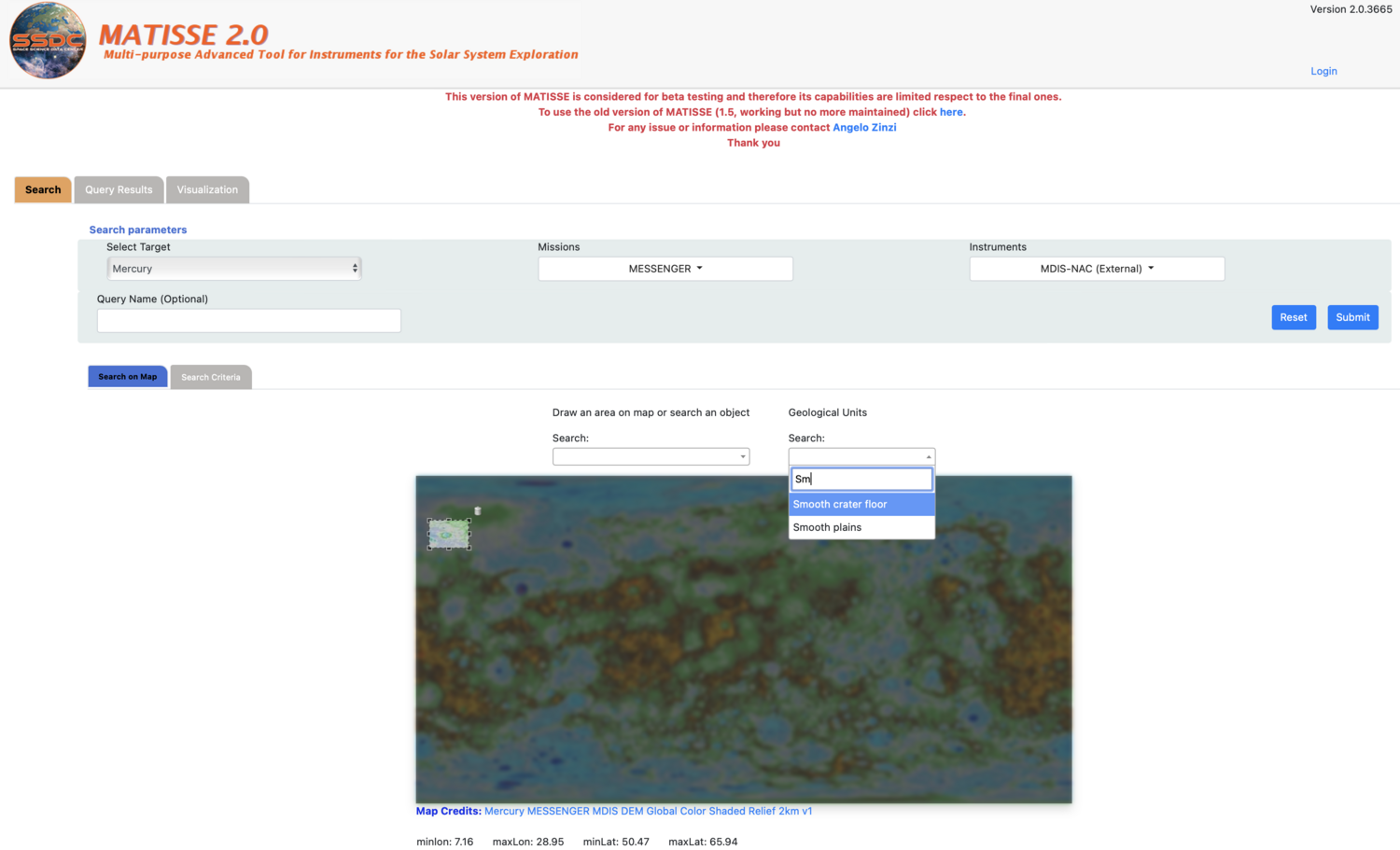 Figure 2. MATISSE homepage and selection of parameters to be observed. Example of selection of the Hokusay crater on Mercury's surface.

The possibility of studying the Mercury surface directly from the tool will allow not only to make a detailed study of the terrain but understanding its formation will help science to understand how the solar wind affects some materials. For this reason our work will allow planetologists and astrophysicists to have all the available data for the study of the planet. In collaboration with the PlanMap and GMap teams, we are currently working to include the geological units identified on the surface of Mercury in order to be ready with the data that will come from the Bepi Colombo mission in order to have everything you need to study this planet in depth.

Next steps. We plan to add in the tool all geological units mapped by GMAP team on Mercury surface. Moreover we will expand in the tool the possibility of searching for data based on the morphologies that the user wants to analyze (e.g. craters, valleys). Another goal will be to expand the use of the tool, making it similar to the geographic information system (GIS). We will expand the possibility of selecting specific areas to be analyzed, having clear the geographical position of the data. It will also be possible to obtain topographic profiles, select more data to be observed. All these analyses will be performed directly on the 3D models. The inclusion of these functionalities in the tool could produce a sensible step forward in the study of planetary geology, with the possibility of better exploiting different datasets and taking also into account the collaboration of different teams already leaders in this field.

[3] Rognini, E., et al. (2022), Effects of mercury surface temperature on the sodium abundance in its exosphere, Planetary and Space Science, 212