Understanding coarse alluvial sediment on Titan: Abrasion and its consequences

Cassini RADAR and Huygens DISR images reveal evidence of fluvial activity on Titan [1,2]. We have taken a tripartite approach to understanding the influence of this activity on Titan’s sediments and their resultant characteristics: (1) radar analog study in Death Valley, (2) laboratory simulation of icy clast comminution, and (3) analysis of radar backscatter from Titan’s fluvial features.

We take ground truth measurements on alluvial fan deposits in Death Valley, California, to understand the surface properties that could be influencing radar backscatter in Titan’s coarse sediment deposits (e.g., Fig. 1A). Although desert alluvium is highly angular, for study of radar backscatter (as σ0), a hyper-arid environment like Death Valley has the advantage of isolating the effects of roughness from the otherwise strong dielectric influence of soil moisture that occurs at most terrestrial locales. Thirty study sites (e.g., Fig. 1B) were selected with a range of σ0 values, incorporating varying grain size, sorting, and shape. C-band (λ = 5.6 cm) and L-band (λ = 23.5 cm) radar backscatter statistics were measured using images from Sentinel-1 and ALOS PALSAR, respectively, to compare with hand measurements of sediment similar to that in past work (e.g., [3]) but with updated methods. We find a logarithmic increase in σ0 with median grain size (Fig. 1C) and possible small increases with roundness and sorting. 3-D surface models made using structure from motion photogrammetry also allow for quantification of roughness parameters like RMS height (s) and correlation length. Such parameters commonly feed into theoretical backscatter models like the Advanced Integral Equation Model (AIEM) and allow us to evaluate these models against our in-situ grain measurements in these unusually rough, coarse-grained conditions (e.g., 2πs/λ > 3). 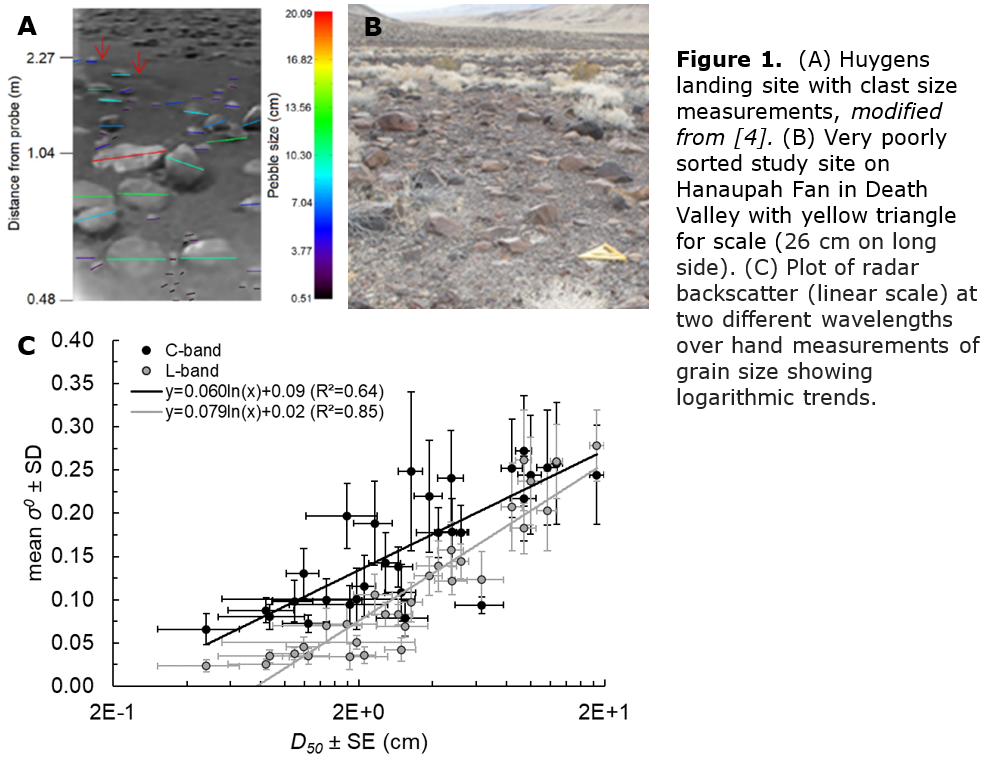 In order to understand how sediment evolves during fluvial transport on Titan, we conducted experiments tumbling icy clasts in a custom liquid-nitrogen-cooled tumbling mill [5] (Fig. 2A). Clasts of varying size, shape, and constituent grain size were tumbled for 10s of kilometers and measured at regular intervals for changes to clast shape and size distribution. Cross-sectional roundness indices (R = 4πArea/Perimeter2) were comparable to the roundest clasts at the Huygens landing site (R > 0.9; Fig. 1A) after just a few kilometers of transport, indicating that rapid rounding is possible for water ice clasts on Titan. Clasts abraded primarily through chert-like fragmentation rather than gradual attrition of clast surfaces to produce fines. Thus, abrasion of sediments in fluvial transport may not be an efficient means of sand production on Titan, which hosts vast stores of sand-sized sediment. Exponential mass-loss rates for water ice clasts at Titan-like temperatures are comparable to those of relatively weak terrestrial materials (Fig. 2B; Ed of ~0.1 to 1 km−1 where Ed = ln(M0/M)/x). For sediment to survive the significant lengths of Titan’s fluvial features [7], material strength greater than water ice may be necessary, e.g., possibly that of expected clathrate hydrates.

Among the variety of fluvial features identified in Cassini RADAR images, some radar-bright fluvial features have been interpreted as coarse-grained, ephemeral streams [1,7]. Because their radar backscatter can be expected to change with ground properties that largely depend on surface alluvium, downstream trends may suggest changes in sediment properties. We mapped and measured the downstream changes in backscatter for >60 large radar-bright fluvial features across Titan’s surface (e.g., Fig. 3A). Despite the difficulty of interpreting these features near the limit of the radar resolution, clear trends often emerge (e.g., Fig 3B). Over a few hundred kilometers, σ0 trends can be fit with absolute linear slopes up to ~0.01 km-1 (i.e., ~0.04 dB/km). Interestingly, although decreasing backscatter would support a hypothesis of clast comminution, some features clearly show increasing σ0 in the downstream direction. Possible factors include fresh sediment input from tributaries, changes in clast composition / dielectric constant, or changes in flow dynamics leading to coarse-grained deposition. 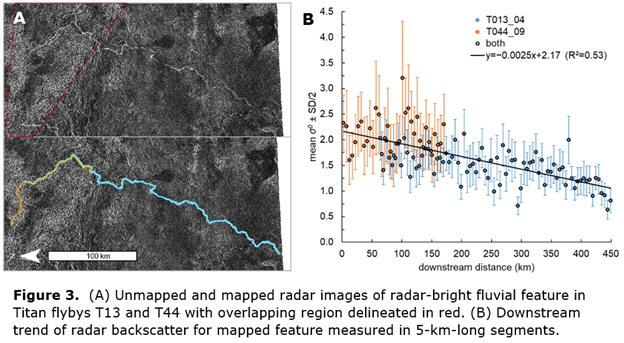 Synthesizing field, lab, and spacecraft data helps us constrain clast properties and their evolution in Titan’s fluvial features and quantify the resultant granulometric changes. Although sediment abrasion can rapidly round water ice clasts into the efficient retroreflectors proposed by [1], they may also be comminuted over shorter distances than many terrestrial materials. The minimal effects of roundness and sorting on radar backscatter compared to grain size suggests more complicated contributions to the backscatter are at play, rather than simple downstream fining, in order to produce the observed variable and non-monotonic downstream trends.