The latest version of the MCD, version 5.3 [2], was released in July 2017, and at the time of writing of this abstract we are working on MCDv6.1 [3], which we will release in June 2022. This new version will benefit from all the recent developments and improvements in the Mars PCM’s physics package.

The MCD is freely distributed and intended to be useful and used in the framework of engineering applications as well as in the context of scientific studies which require accurate knowledge of the state of the Martian atmosphere. Over the years, various versions of the MCD have been released and handed to more than 400 teams around the world.

The MCD is freely available upon request via an online form on the dedicated website: http://www-mars.lmd.jussieu.fr which moreover includes a convenient web interface for quick looks. 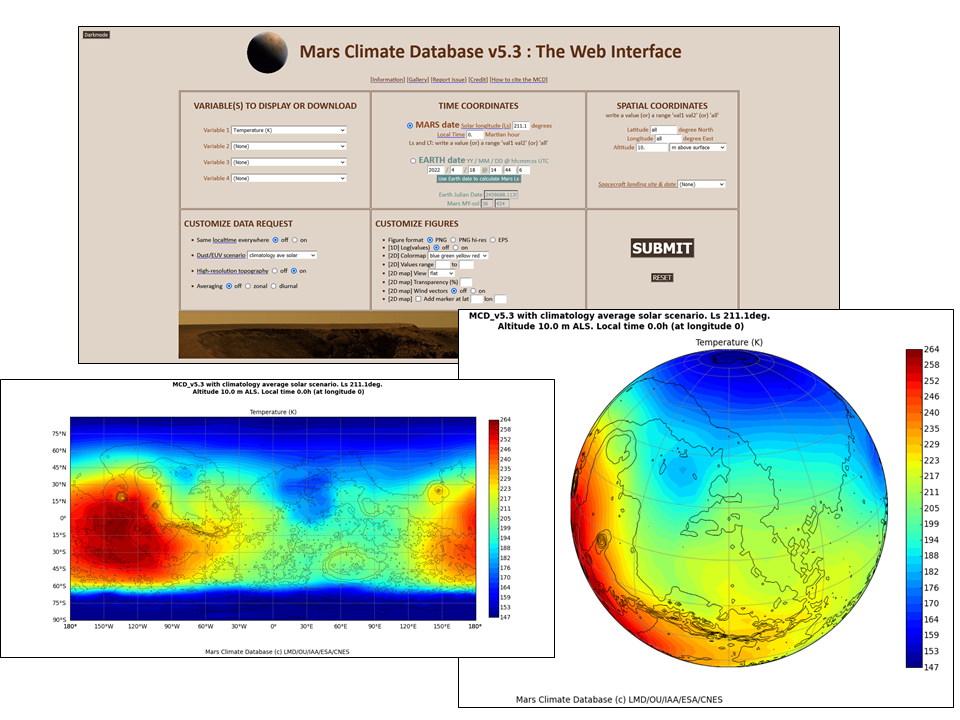 The MCD provides mean values and statistics of the main meteorological variables (atmospheric temperature, density, pressure and winds) as well as atmospheric composition (including dust and water vapor and ice content), as the GCM from which the datasets are obtained includes water cycle, chemistry, and ionosphere models. The database extends up to and including the thermosphere (~350km). Since the influence of Extreme Ultra Violet (EUV) input from the sun is significant in the latter, 3 EUV scenarios (solar minimum, average and maximum inputs) account for the impact of the various states of the solar cycle.

As the main driver of the Martian climate is the dust loading of the atmosphere, the MCD provides climatologies over a series of synthetic dust scenarios: standard year (a.k.a. climatology), cold (i.e: low dust), warm (i.e: dusty atmosphere) and dust storm, These are derived from home-made, instrument-derived (TES, THEMIS, MCS, MERs), dust climatology of the last 12 Martian years. In addition, we also provide additional “add-on” scenarios which focus on individual Martian Years (from MY 24 to MY 35) for users more interested in more specific climatologies than the MCD baseline scenarios.

In practice the MCD provides users with:

At EPSC2022 we will present validation campaigns between the MCDv6.1 and multiple measurements such as:

So many over the years...