Active asteroids are small solar system bodies, having at the same time the orbital characteristics of asteroids but showing the physical characteristics of comets, including coma and tail-like appearance. A subpopulation of active asteroids that have sublimation as the main source of activity is known as main-belt comets (MBCs, [6]). The MBCs could be a key to tracing the origin and evolution of volatile materials in the asteroid belt and could help our understanding of the protoplanetary disk process and planetary formation. The number of known MBCs is, however, still relatively small. For this reason, the characterisation of new objects is of considerable importance.

This work analyses active asteroid (248370) 2005QN173, (aka 433P). Its activity was recently discovered by Fitzsimmons et al. [4] in the images collected by the Asteroid-Terrestrial-Impact Last Alert System (ATLAS;[11]). Based on the recurrent activity, Chandler et al. [3] suggested that activity is sublimation-driven, making asteroid 248370 a main-belt comet. Aiming to constrain possible activity mechanisms further, we performed photometric observations of 248370. Our primary goals are to quantify the activity level variation and determine the rotation period. The activity changes could help better understand what is driving the activity. Similarly, the rotation period provides a clue on a possible mass shedding due to rotational instabilities. Furthermore, we also analysed its dynamical stability in order to get insights into the past orbit evolution. Finally, we investigated its possible association with asteroid families.

Observations of the 248370 were collected on 2021 October 5/6 from the Astronomical station Vidojevica (C89), using a 1.4 m Milanković telescope. All images were made in standard Johnson-Cousin R-filter. 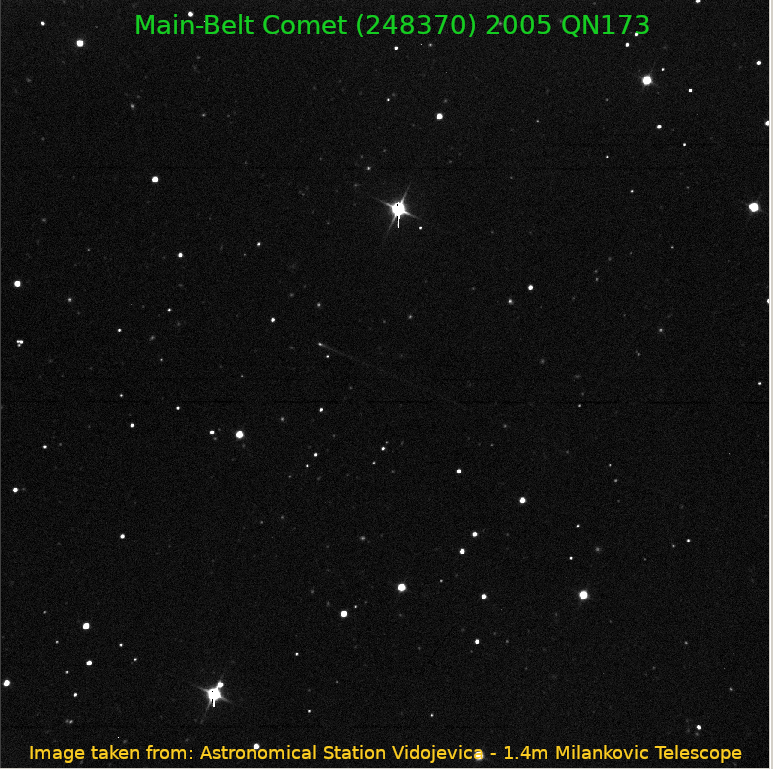 Unfortunately, we were not able to find a unique rotational period solution. Instead, we derived two possible periods of 2.7±0.1 and 4.1±0.1 hours. The corresponding light-curve amplitudes computed after correcting for the effect of coma are 0.28 and 0.58 mag, respectively. An example of the obtained light-curve of 248370, along with a fit corresponding to the period solution of 2.7±0.1 h, is shown in Figure 2. 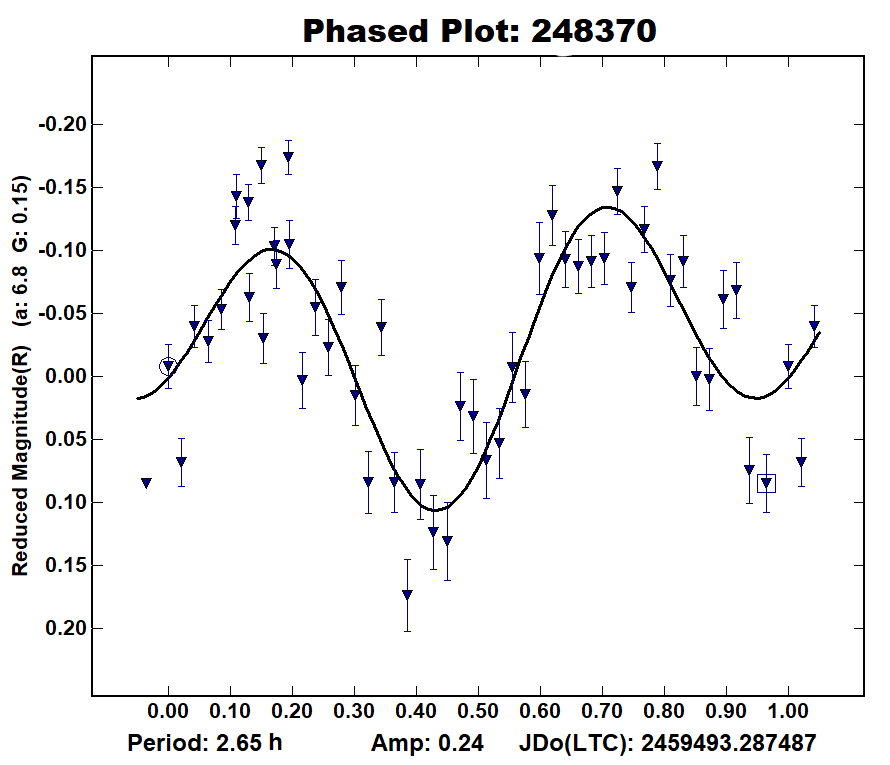 We also calculated the rotational fission critical limit for a strengthless triaxial ellipsoid [8] for the light-curve solutions. It turns out that both periods are shorter than the critical limit, suggesting that rotation mass shedding could be partly responsible for the observed activity.

The activity level is constrained by estimating the length of the tail, Ad/An ratio, and Afρ parameter of 248370. The projection of the tail onto the sky, estimated from the composed image, extends approximately 4 arcmins from the nucleus. This length corresponds to a physical extension of about 264,000 km, about a factor 3 shorter than estimated by Hsieh et al. [7] from their observations made closer to the perihelion.

The estimated scattering cross-section of ejected near-nucleus particles and the underlying nucleus is Ad/An = 1.3. It also confirms that the activity level is fading as the object moves further from the perihelion but at a modest rate of only 0.006 mag/day.

Afρ is the ratio between the effective cross-section of comet grains in the field of view and the area of that field [1]. From our observations, we obtained a value of Afρ = 10.8. Compared to the values obtained by Hsieh et al. [7], the parameter has constantly decreased since the perihelion passage. All these findings are consistent with the sublimation-driven activity.

The dynamical analysis has shown that 248370 is a dynamically unstable object, residing in 11/5 mean motion resonance with Jupiter. Its Lyapunov time is only about five kyr, further suggesting that the object is highly unstable. This implies that 248370 is not residing at its current orbit for a very long time but instead migrated into the resonance, probably due to the Yarkovsky effect, within the maximum last 100 Myr.

The level of the activity trend is consistent with sublimation driven activity in active asteroid 248370. However, the most likely spin period solutions are both below the critical limit for rotational mass shedding. Therefore, this mechanism could also play a role in the object’s coma and tail production. This brings some similarities between 248370 and binary MBC 228P [2]. The situation is especially intriguing as the two objects are close in the orbital space and might both originate from the same collisionally disrupted parent body.