Impact processes shaped the Solar System, and modify planetary surfaces and small bodies until today. Impacts also have a technical application for Planetary Defence, exemplified by the joint ESA/NASA Asteroid Impact and Deflection Assessment (AIDA) collaboration. This session aims at understanding impact processes at all scales in terms of shock metamorphism, dynamical aspects, geochemical consequences, environmental effects and biotic response, and cratering chronology. Naturally, advancing our understanding of impact phenomena requires a multidisciplinary approach, which includes (but it is not limited to) observations of craters, strewn field or airbursts, numerical modelling, laboratory experiments, geologic and structural mapping, remote sensing, as well as petrographic and geochemical analysis of impact products.

We welcome presentations across this broad range of studies about natural or artificial impact collision phenomena on planetary and small bodies. In particular, we encourage work that bridges the gap between the investigative methods employed in studying planetary impact processes at all scales. 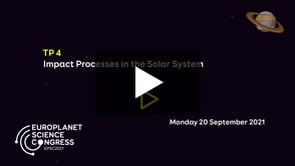 On 2017-09-27 at 18:56:12 UT a large meteoroid impacted the lunar surface, causing an impact flash with a duration of 1.12 seconds. Using Lunar Reconnaissance Orbiter Camera images, and the PyNAPLE (Python NAC Automatic Pair Lunar Evaluator) software pipeline, the resultant crater was identified. The crater is located at latitude φ= 8.0288, longitude λ = -76.546, approximately 14km east of the crater Glushko. The asymmetrical morphology of the ejecta blanket indicates the direction of impact was from the south, and impacting incidence angle was <30o.

Lunar impacts are monitored on a regular basis, by both amateur and professional groups [1,2,3]. Since the first confirmed recording of a lunar impact flash in 1999, at least 600 confirmed impact flashes have been observed.

This large volume of data has let to several studies on both the properties of the impactor, and the thermal evolution of the impact itself [4,5,6]. These studies make use of the observed brightness of the flash, and the most likely parent meteoroid stream to calculate the total energy and temperature of the impact, and estimate the resultant crater size.

Very few of these impact craters have located [7] however, as finding metre scale craters and linking them to an observed impact with certainty is difficult. By identifying the resultant crater from an observed impact flash, valuable ground truth data can be obtained to help constrain the energy of the impact through use of crater scaling laws. The ejecta pattern of the impact can also tell us important information about the trajectory of the impactor.

At 18:56:10 UT on 2017-09-27, a meteoroid impacted the lunar surface. The impact was observed by SdR UAI Luna members Bruno Cantarella and Luigi Zanatta, using a dual telescope system capturing with ZWO ASI120MM cameras, running at 25fps in one telescope, and 30fps in the other. It was also confirmed to be observed by Stefano Sposetti in Gnosca, Switzerland, ruling out the possibility the flash being a false detection.

The flash lasted 29 frames in the 25fps camera, giving it a duration of 1.12s. The first 22 frames are shown in Fig. 1. Its peak luminosity is reached in the second frame after only 0.04s, with the peak quantum efficiency of the camera at 590nm.

As there were no meteor streams active at the time of the impact, it is concluded that the impactor belonged to the sporadic meteor background.

PyNAPLE works by searching for all before-after LRO NAC image pairs for a given time and location on the lunar surface, and running them through several operations which calibrate, map project, register, and align the images in order for pixel by pixel division to occur. This produces a final image in which similarities have cancelled out, and changes between the images are highlighted.

The ejecta blanket and newly exposed regolith are higher albedo than the surrounding undisturbed material. Consequently, in the current LROC images the fresh regolith is overexposed, and no measurements as the craters diameter can be made, although the extent of the ejecta can be measured up to 600m away from the point of impact. This prevents the calculation of impact energy by employing crater scaling laws at this time. As the LRO is still collecting images, however, once new images of the site get released, these calculations will be possible.

The ejecta blanket of the impact crater tells us some information on the impact. The asymmetrical morphology of the ejecta blanket, shown in Fig. 3, is formed by the meteoroid impacting with an angle below ~30o incidence, according to Shuvalov’s findings for projectiles below 100m in size [9]. The exclusion zone towards the bottom of the image containing no ejecta is indicative of the up-range direction of the impactor being towards the bottom of the image.

Knowing the direction of the impact is important as incidence angle plays a large part in a number of crater scaling laws [10], but also as a way to differentiate potential parent meteoroid streams if there were multiple possible candidates.