Space and ground based observations of the small body populations in the Solar System are continuously reshaping our understanding of how these objects were formed and evolved. New data and theoretical advances, as well as the discovery of interstellar objects and extrasolar comets give us new insights on the physical and dynamical properties of small bodies. The goal of this session is to highlight recent results from outer planetary system objects (comets, KBOs, Centaurs, interstellar, …) that provide fundamental clues about the early stages of planetary systems. We aim to explore the continuum of small bodies and the overlap between different populations through a balanced set of contributions from ground based observers and space missions (e.g. Rosetta, New Horizons) 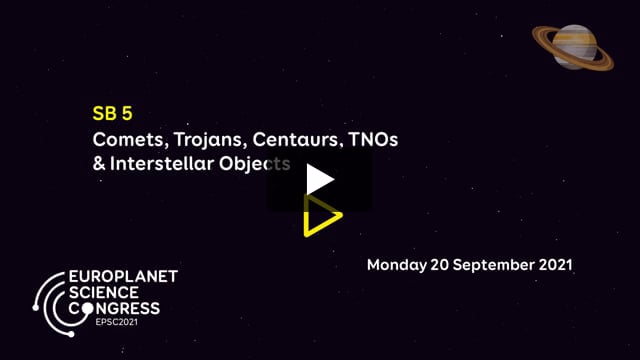 Understanding cometary activity is key to exploring their materials and surface physics, with implications for comet formation and subsequent evolution. Outgassing produces a reaction force on nuclei that can alter their trajectory and spin, allowing constraints to be placed on comet models by measuring the observed orbit and rotation changes. For comet 67P/Churyumov-Gerasimenko, detailed measurements have been made by the Rosetta spacecraft and various attempts have been made to model the activity (see, e.g. [1,2]).

Here we will present ongoing work, testing various activity distributions in an effort to fit Rosetta outgassing, trajectory, and rotation data using the activity model of [2]. We test a number of different activity distributions over the surface of the comet by varying the Effective Active Fraction (EAF), relative to pure water ice, of facets on a shape model. We investigate different spatial patterns in EAF, and attempt to correlate them to physical features on the cometary surface. Here we are able to achieve a good fit to the Rosetta data by parameterizing EAF in terms of the different geological unit types on 67P (Fig. 1). This will have important implications for understanding how activity works on the different types of surface observed on cometary nuclei, including ‘rough’, ‘smooth’, ‘dusty’ and ‘rocky’ surface morphologies.. The objective here is to constrain the shape of the activity curve on these various surfaces that a more detailed thermal model (see, for example [3,4]) must produce in order to fit the data.

In addition to the changes in rotation period examined in [2], we also compute changes in the rotation axis, using a method based on [5] in order to compare with the observations. This provides an additional constraint on the spatial distribution of activity. Finally, we also compare the trajectory information, in the form of Earth-to-comet range, with the new analysis of Rosetta radio-tracking data performed in [6].

Fig. 1. Peak Effective Active Fraction over the surface of 67P for a model fit to geological unit types.

The Rosetta mission provided detailed data of the surface of the nucleus of comet 67P/Churyumov-Gerasimenko. The analysis of these data, and especially the images of the Narrow Angle Camera (NAC) from the Optical Spectroscopic and Infrared Remote Imaging System (OSIRIS instrument; Keller et al., 2007), revealed the morphological diversity of the nucleus surface (El-Maarry et al., 2019). Among these morphologies, depressions have been observed in several regions (Fig.1).

The origin of these structures remains unclear and several hypotheses have been proposed: (1) the depressions could be indicative of scarp retreat (Vincent et al., 2016; El-Maary et al., 2017), (2) they mark the location of future cliff collapses (Pajola et al., 2016d), and (3) they are seasonal structures shaped by the changes induced by perihelion approach (Groussin et al., 2015). In a previous study, we studied two of these depressions, located in the Ash region, by a comparative morphometrical analysis (Bouquety et al., 2021).  We observed that the two depressions grew by several meters during the last perihelion passage, and that this growth is not necessarily linked with cliff collapses. Thus, in that case, the sublimation of ices certainly played a key role in shaping these depressions.

On Earth and Mars, there are similar depressions with the same shape and geometry that are controlled by thaw processes. These depressions are called thermokarstic lakes on Earth and scallops depressions on Mars (Fig.2).  On both planets, these periglacial structures result from the degradation of an ice rich permafrost (Costard and Kargel, 1995; Morgenstern et al., 2007; Séjourné et al., 2011).

Due to their processes and morphological similarities, we decided to compare the depressions observed on 67P’s surface with thermokarstic lakes on Earth and scallops depressions on Mars to constrain their origin.

We used the same method as in Bouquety et al., (2021). This comparative morphometrical analysis (CMA) allows to study surface features via a morphological and geometrical approach, with a great level of detail, in order to build an interplanetary database which can be used for comparison.