Mars research community has seen an exceptional growth this year, with the unprecedented presence of 11 missions observing the planet simultaneously. The aim of this session is to share the knowledge and experience gained by all Mars missions, in operations and development, including the 3 new missions arrived this year.

We welcome contributions from any field of Mars science and exploration, in particular latest scientific results and instrument overviews, to promote synergies among the various exploration programmes in Europe and worldwide. This includes the latest results from all operational orbiters (Mars Express, ExoMars TGO, Odyssey, MRO, MAVEN, Mangalyaan/MOM, Tianwen-1, Hope) and surface assets (MSL, Insight, Mars2020, Tianwen-1), plus any operational and technical developments in preparation for the new missions (ExoMars RSP, MMX, Mars Sample Return, etc). 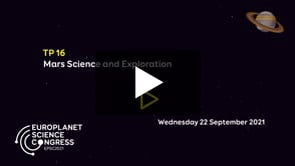 After 17 years in orbit Mars Express remains one of ESA’s most scientifically productive Solar System missions which publication record exceeds 1350 papers. Characterization of the surface geology on a local-to-regional scale by HRSC, OMEGA and partner experiments on NASA spacecraft has allowed constraining land-forming processes in space and time. Recent studies characterized the geology of Jezero crater in great detail and provided Digital Elevation Model (DEM) of several equatorial regions at 50 m/px resolution. New maps and catalogues of surface minerals with 200 m/px resolution were released. MARSIS radar published new observations and analysis of the multiple subglacial water bodies underneath the Southern polar cap. Modelling suggested that the “ponds” can be composed of hypersaline perchlorate brines.

Spectrometers and imagers SPICAM, PFS, OMEGA, HRSC and VMC continued amending the longest record of atmospheric parameters such as temperature, dust content, water vapor and ozone abundance, water ice and CO2 clouds distribution and observing transient phenomena. More than 27,000 ozone profiles derived from SPICAM UV spectra obtained in MY#26 through MY#28 were assimilated in the OpenMARS database. Observed anti-correlation of ozone and water vapor abundance revealed a strong chemical coupling between these two species. A new “scan” mode of the spacecraft was designed and implemented to investigate diurnal variations of the atmospheric parameters. Observations of the atmospheric parameters and their local time variations above Tharsis region and Hellas basin contribute to mesoscale meteorology. Imaging revealed the properties of the elongated orographic cloud at Arsia Mons and other topography highs.

ASPERA measurements together with MAVEN “deep dip” data enabled assessment of the conditions that lead to the formation of the dayside ionopause in the regions with and without strong crustal magnetic fields suggesting that the ionopause occurs where the total ionospheric pressure (magnetic + thermal) equals the upstream solar wind dynamic pressure. First results of active sounding of the local plasma by ASPERA detecting ions accelerated by the MARSIS radar pulses appears promising in the study of plasma composition.

In 2020-2021 Mars Express successfully performed two types of novel observations. In egress-only radio-occultations a two-way radio link was locked at a tangent altitude of about 50 km. This is well below the ionospheric peak and in future would allow perfect sounding of the entire ionosphere thus doubling the number of ionospheric soundings. MEX and TGO performed several UHF radio-occultation tests in preparation for the dual-spacecraft radio-occultation sounding.

Mars Express is extended till the end of 2022. A science case for the mission extension in 2023-2025 will be submitted by the end of 2021. The talk will give the Mars Express status, review the recent science highlights, and outline future plans including synergistic science with TGO.

Planetary radar sounders (RS) are spaceborne nadir-pointing instruments operating in High Frequency (HF) or Very High (VHF) frequency bands. Radar signals in these bands can propagate through planetary subsurfaces up to several kilometers. The subsurface structure can be inferred by analyzing the radar echoes recorded by these types of instruments. Planetary RS data have been a valuable information source for analyzing the subsurface of the Moon [1] and Mars [2]. For mechanical reasons, the deployed RS antennas are typically dipoles. Dipoles illuminate a large area of the overlying surface. Hence, the recorded RS data are typically contaminated by unwanted off-nadir surface reflections, considered clutter. However, these unwanted reflections carry valuable information regarding the nature of the probed surface and the shallow subsurface. Recent research has exploited off-nadir reflections for effectively imaging target planetary surfaces. This is achieved by combining the acquired RS data with a suitable digital elevation model (DEM) of the surface and by exploiting multiple orbital passes over the same region. Kobayashi et al. [3] generated images of the Moon surface by exploiting radargrams acquired by the Lunar Radar Sounder (LRS), which operates at 5 MHz central frequency. Carrer et al. [4] exploited SHAllow RADar (SHARAD) data for generating HF roughness images of the surface of Mars. SHARAD operates at 20 MHz central frequency. Both approaches are effective not only in generating higher resolution HF images of the surface with respect to previous work [5] but also in detecting shallow buried features (that are not easily detectable by standard data analysis) [4]. However, both works are focused on the analysis of small regions. The generation of large area images faces challenges that are not usually present when generating smaller images. These challenges are resulting from large variations in (i) the sensor viewing geometry, (ii) the radiometric properties of the surface, and (iii) the non-uniform data availability. Here, we propose an approach to generate large scale radar HF roughness images of Mars starting from the methodology described in [4]. Global surface roughness images can provide additional insights into surface processes and in detecting additional buried geological structures. We extend the original image generation methodology by proposing approaches for reducing the radiometric artifacts and improving the quality of the large-scale image while preserving the fidelity of the contained scientific information. The radiometric artifacts appear as vertical stripes crossing the image due to the orbital variations of the spacecraft among different acquisitions. This typically results in a variation of the spacecraft’s altitude causing a received echo power fluctuation. Therefore, we apply inter-calibration to compensate the losses caused by the actual spacecraft’s altitude and normalize the echo power with a reference altitude. Radiometric compensation is challenging as the recorded echo power from a given surface point exhibits large variations that are function of the radiation incidence angle. This effect is particularly pronounced in RS data as scattering can be both coherent and incoherent. To compensate for this, we fit the recorded echo power as function of incidence angle with a suitable back-scattering model (i.e., Hagfors [5]). The incidence angle power correction is performed iteratively on smaller portions of the image where we can assume that the surface statistical properties belong to the same distribution. Finally, coherent scattering data originating from the first Fresnel zone are discarded as they generate reflections that are difficult to compensate in the large-scale image. Here, we apply the proposed approach to generate Mars global roughness images by using Mars Advanced Radar for Subsurface and Ionosphere Sounding (MARSIS) data in combination with the Mars Orbiter Laser Altimeter (MOLA) digital elevation model. MARSIS operates at a central frequency between 1.8 and 5 MHz. This implies the possibility of generating images at different frequency bands that could provide different information regarding the surface and the shallow subsurface. As MARSIS operates at lower frequencies than SHARAD, we expect that also in this case the generated images contain shallow subsurface information [4]. Fig. 1 shows an example of Mars HF roughness image at 4 MHz obtained by the proposed methodology over Arabia Terra and Syrtis Major quadrangles. The pixel resolution is 463 m x 463 m. Large intensity pixels correspond to higher surface roughness with respect to the small intensity ones. The results confirm the effectiveness of the approach, where the presence of the radiometric artifacts is minimized while preserving the scientific information integrity. The image contains several detailed surface features such as the area of Mamers Valles shown in Fig. 2. The system of fretted channels appears with an unusual very low roughness in the image with respect to the surroundings. Investigations are in progress to fully understand the origin of this radar response. Roughness images can also be used for better outlining geological units and could help in identifying shallow buried geological formations on a global scale.